Sailor Giovanni Soldini’s sense of time where there is no elsewhere, no desires, and few doubts about how to use your time. 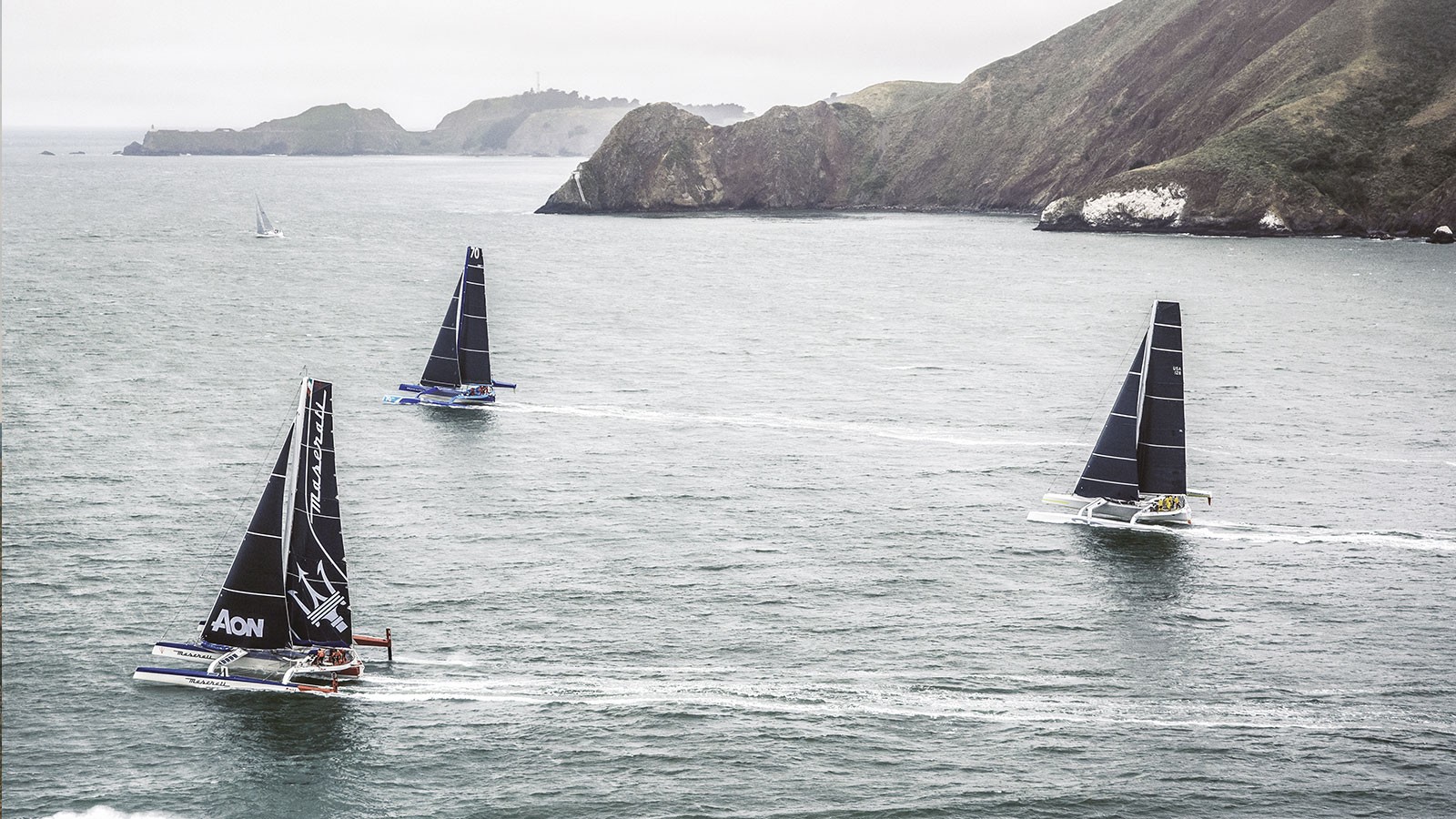 The future vanishes just a few miles away from the pier. Past the port, there are no promises, no appointments, no worklists, no timetables, no projects. Everything becomes the present moment: Italian sailor Giovanni Soldini defines it as “a sequence of moments,” highlighting that this is more of an experience than an abstract concept. Sleep-wake shifts slip away through the hours: checks, tools—there’s always something that keeps you busy.

There is no elsewhere, no space for desires, and very few doubts about how to make the best use of your time: “It’s all about the present, and the pact that you made with the boat to always listen to it, and always do what needs to be done. It’s all very clear.” Giovanni Soldini is not a meditation expert—yet, he knows the difference between an hour that’s remitted from its befores and afters: he’s been sailing since he was a teenager. Born in Milan, Italy, in 1966, he has earned throughout his life a long list of records and victories for ocean races and world tours, both alone, or with a crew, and also solo raced around the world twice. His first solo race was in 1999 when he became world-renowned for his spectacular rescue of French sailor Isabelle Autissier, from her overturned yacht in the South Pacific Ocean. Soldini is often recognized and thanked for that rescue. He says: “If only they congratulated all men and women who save lives at sea.” 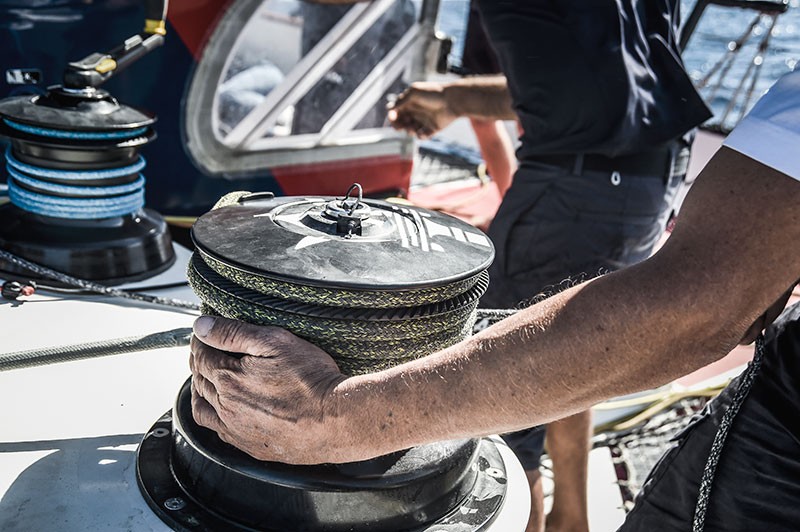 What’s the consistency of time when one sails for days, weeks or months, is the question Soldini answers with this “pervasive present,” an ongoing now where you “don’t have any appointments; maybe for a weather update, but that’s all. Other than that, no matter if you’re alone or with a crew, you’re in a tunnel. When at sea, I’ve always felt privileged: It’s where I want to be; time doesn’t age there, there is no space for anxiety. Anxiety kicks in only 1,000 miles away from the finish line, which is when you start feeling the competition. Other than this, it’s just you, with your strategies and ways. The only stress is surviving—but that only happens sometimes. Some other times, instead, you’re just there, happy, planning with your boat next to an albatross, or sailing at 20 knots for miles and miles, and you can let your thoughts trail off, think of life, nature, politics, your children, yourself, your boat. Nobody bothers you.”

Even at sea there are times when thinking becomes harder, and the well-oiled mechanism of “doing” as an urgent and present act jams. There is no need to recall the curse of the old mariner to evoke the anguish that a calm can cause. “A calm is hell. In case of a storm you basically just sleep below deck, since there’s not much else you can do other than wait for it to end. When there is a calm, you have to constantly look after the boat all the time, because the first one to get out of the void firmly distances himself from their opponents. If you don’t take that opportunity, you can pile up 20 miles of delay, and you won’t catch up with the group easily. During my second solo race around the world, I chose a route that nobody else chose. I stayed farther north than the rest of the competitors. At the beginning, I gained a lot of ground. I was happy, I was ahead of everyone, I was sure I would win that leg. Then, a low-pressure area came in, causing the wind to change direction. I didn’t move for four full days; I was so distressed, I almost started banging my head against the boat’s mast. Everyone else was moving fast, and I was motionless, trying to make my boat move in any way that I could, imagining every possible maneuver, but there was nothing that I could do, I was desperate. I ended up crossing the finish line 18 hours after the winner.”

In his Rime of the Ancient Mariner, published in 1798, English poet Samuel Taylor Coleridge depicted the mariners’ nightmares, the dark side of the wind abandoning you: a punishment. Just like the midday madness that comes after an effort. Soldini knows both. “The biggest mistake you can make when you’re alone at sea is to exceed your energy limits. It takes nothing to lose consciousness. And when you realize you will, it’s usually too late. It’s done.” When fatigue kicks in and wins you over “you can’t sleep, for example. You sit down, know that the alarm clears in 15 minutes and keep telling to yourself: I gotta sleep, I gotta sleep, I gotta sleep. But you can’t. In long regattas, like those around the world, it happens less frequently, because you protect your psychophysical state from the very beginning, you stick to the rules and try to sleep at least four or five hours a day. It’s middle-distance races that are the most challenging. I remember a solo, eight- to nine-day transoceanic race: at day four you think you’re almost done, but you’re not in full shape—and that’s when you lose it, you lose the balance. I was on a trimaran, a boat that’s more physically and mentally demanding than a motorboat. At some point, I started seeing some friends around me. I remember shouting at one of them: “Hurry up, help me reef the sails or we’ll flip over.” And I’d get mad at him because he wouldn’t help me. Then, I realized they were not there. It’s common to hallucinate when on a boat. Your self-consciousness comes back after a while. The only way to get your strength back is to stop, but you don’t stop in a regatta. That time, on the 8th day I lost all the advantage I had gained in the previous legs. After disembarking, I was taken to a restaurant. I put my head on the table and fell asleep.”

“I think regattas are won over balance. When you win, it’s because you’ve kept the focus, both alone or with a crew. Maybe that’s also why women are such strong solo sailors. Because they’re very balanced. Some sailors are obsessed, but to me, obsession doesn’t pay off. Winning or losing is often a matter of minutes, seconds, but it’s not those minutes,” he warns, “that one has to look at.” On the Tea Route, which is 15,083 miles long, Soldini’s Maserati Multi70 trimaran set a record of 36 days, 2 hours, 37 minutes, and 12 seconds. “That’s also a matter of balance, other than a result achieved by the crew and all the technicians we’re working on the boat with. It’s an innovative hull; we’re experimenting on new solutions, we’re gradually trying to understand where to make changes that could make the boat even more stable and fast. Last summer, something big hit the left hull, damaging it. We stopped for one hour, disassembled the wing, and the following day we fixed that two-meters scar, all by ourselves. We can do it because we know the boat in detail.”

It’s part of the balance Soldini needs when he’s by the mainland too. “Some people just stay at the helm. I, instead, like to fix things, check stuff, follow developments and ideas from their inception. It lets me be more independent when I’m at sea, more capable of reacting to unexpected events.” To hear him speak, it seems like it’s a strategy that above all protects him from the assault of the mainland, from the city commitments, the rain, the evenings, the chats. It prevents sailing from becoming work and time from shifting from ‘now’ to ‘later’ and quickly expiring, becoming full of regrets. “When I’m on land, I often feel like I’m wasting my time. I used to have the same feeling when I was a kid. At sea, I never have that feeling. But on land I feel it; I feel the anxiety. That stress of trying to sell a project and feeling that whoever could, or should, support it is “almost convinced” but leaves you in limbo for months; the search for money you can’t find; the organization, the components that are not working, the materials, the quarrels, the management.” There’s only one way, he says, to survive all this: “trying to sail as much as I can. I’m happy with any space I can carve out.”

He admits it’s tempting to follow the example of Bernard Moitessier, one of the most greatest French sailors, who unwinded his binds for months and gave up on competitions, “it’s not easy to do so, we’re not alone in the world,” he points out. “But I’d love to do it; I’ve never been to Polynesia, I’ll dedicate myself to travel as soon as I retire.” By the sea, of course. Soldini recalls his first time by the ocean. “I was little. I went out on the sea with a 70-year-old shipowner who calculated the route by hand, wrote the numbers in pencil and used a sextant for orientation. We were completely free to stay at the helm, and be in charge, both in day and night shifts. It was incredibly exciting. After 15 days looking at nothing else but the sea on the horizon, suddenly Antigua appeared in the distance. GPS has made many skills useless. Before, you would lose eye-contact with the mainland but you still more or less knew your location before finding it back again. You wouldn’t constantly look at the boat’s position through a screen.”