A brief history of time

Our awareness of time — how we measure and explain it — is one of the most distinguishing features of humans. 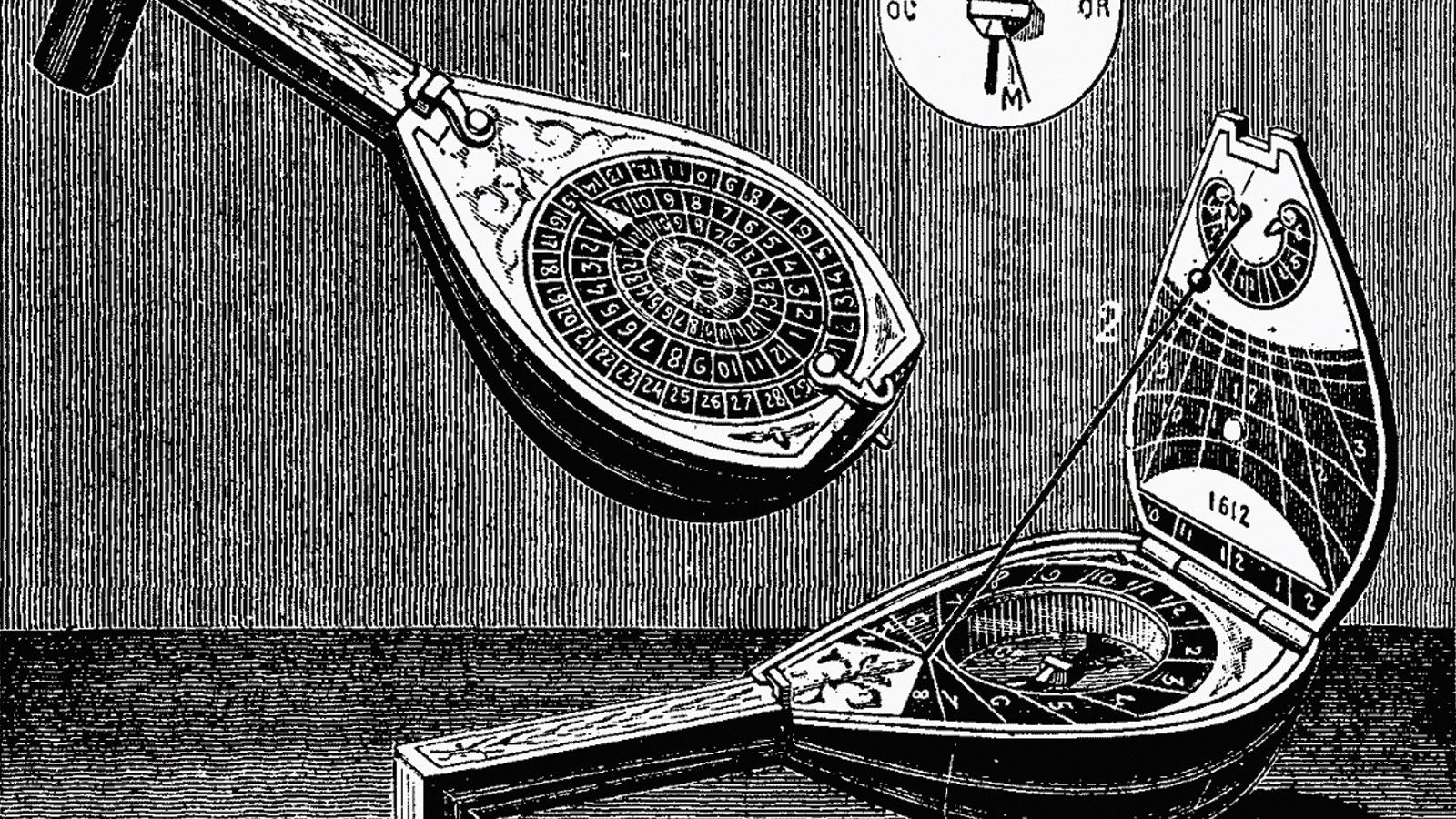 When speaking about time, where do we begin? Time is familiar to everyone, yet hard to define and understand. Do we start from the beginning, from the Big Bang? Should we speak about pendulums or the spacetime continuum? How can we describe something so vast, so infinite as time?

Science, philosophy, and religion have different definitions of time, but the system used to measure it is relatively consistent. Nowadays, clocks all over the world are based on seconds, minutes, and hours. But this was not always the case. Ever since human beings have existed, we’ve measured time by observing nature: the change of seasons, the dance of heavenly bodies across the sky. As the sun travels, shadows change direction and length, so a simple sundial can measure a day. From Stonehenge to the ancient Chinese observatory in Shanxi, many Neolithic constructions were built to mark the midwinter solstice and celebrate the start of each new year.

Finally, mechanical clocks replaced these archaic devices and have become extraordinarily precise timekeepers. The first clock escapement mechanism is said to have been invented in 1275. In 1656, Christiaan Huygens made the first pendulum clock, regulated by a mechanism with a natural period of oscillation. It was not until 1884 that a conference adopted Greenwich Mean Time as the international time standard. Today’s atomic clocks—which operate by measuring the vibrations of strontium atoms as their electrons leap among energy levels—are so accurate that it is said they won’t lose a single second over the next 15 billion years. Yet time isn’t as natural or as objective as it seems and our attempts to measure time only scratch the surface.

All humans experience time, yet we rarely ask: What is time? At first glance, it seems obvious: it is the ticking of the clock, the turning of the pages of a calendar. But these are incidental physical manifestations of its underlying concept: time is a mystery that never ceases to puzzle us. In the ancient world, mythology and other traditional narratives were used to try and make sense of the universe. In Greek mythology, Kronos was the personification of time. Ancient Greeks actually had two different words for time: chronos, for numeric or chronological time, and kairos, for a correct or opportune moment. Other mythologies had time-related gods, such as Heh, the Egyptian deification of eternity, Zurvan, the Zoroastrian god of infinite time, and Elli, the Norse god of old age.

Our sense of time has to do with how we relate to one another and understand our place in the universe. Our awareness of it is, therefore, one of the most important distinguishing features of humankind and one of the sensations that truly separate us from the other animals. Time has always been a product of the human imagination. Judeo-Christian societies learned to perceive historical time as linear and unidirectional because of a story that they told themselves about humankind’s fate. Incas and the Mayans created cosmologies from cyclical and continuous tales. In Indian philosophy, the universe went through repeated cycles of creation, destruction, and rebirth. This led to viewing time as a cycle, the so-called “wheel of time” or Kalachakra, in which there are repeating ages over the infinite life of the universe. The wheel of time concept is also present in Hinduism and Buddhism.

Many philosophers believe that time is continuous and that it has an intrinsic order (i.e., events progress from past to future). Ancient Indian and Greek philosophies were among the first to question time as a mysterious concept. One major point of contention was whether or not time is linear or cyclical, endless or finite. Early Greek philosophers believed that the universe was infinite. Plato’s student, Aristotle, believed in continuous time. He was also the first to frame a commonly-mentioned paradox about the existence of time, reframed by St. Augustine several centuries later: If time essentially consists of two different kinds of non-existence (the future or the “no longer,” and the past or the “not yet”) separated by a nothing (the instantaneous and vanishing present or “now”), how then can we talk of time as actually existing at all?

St. Augustine (4th – 5th century CE), an early-Christian theologian, probably thought more deeply about the nature of time than any philosopher since ancient Greece, but his reflections were inconclusive. He concluded that time was a “distention” of the mind which allowed us to simultaneously grasp the past in memory, the present by attention, and the future by expectation. Christian and Muslim philosophers tried their best to incorporate Aristotle into their theology during the early Middle Ages, but they struggled mightily with his belief in infinite time. It was considered finite, in a doctrine known as temporal finitism. Various versions of Christian creationism persist today, although they are not all as literal as the pontifications of medieval philosophers.

In the 14th century, the French mathematician Nicole Oresme, studied time, from a mathematical and scientific perspective. During the 17th and 18th centuries, the nature of time once again became a point of philosophical contention: Is it real? Or is its passage an illusion? On one hand, there was the realist viewpoint, championed by Sir Isaac Newton: absolute time exists independently of any perceiver and can only be understood mathematically. Time is, therefore, an entity in its own right, and we (and all the objects in the universe) are temporarily “occupying” it. On the other hand, Gottfried Leibniz firmly believed that time does not refer to an existing dimension. The anti-realist view of time claims that it is a convenient intellectual concept (like space and numbers) that enables us to sequence and compare events. For him, time (and space) are the product of how we understand the world. Another German philosopher, Immanuel Kant, in his influential 1781 book The Critique of Pure Reason, described space and time as a priori, notions that are necessary to allow us to comprehend sensory experiences, but not substances or entities.

In the late 19th century, E. Robert Kelley, introduced “specious present.” He saw the present as the most recent part of the past. This idea was developed by William James as he described the specious present as “the short part of which we are immediately and incessantly sensible.” In the same period, Edmund Husserl, founder of the influential phenomenology movement, began to consider time and our internal consciousness of it. He asserted that we cannot perceive the immediate present without some memory of the past and some expectation of the future for context. Henri Bergson revolutionized our understanding of memory: he formulated a view of time that was not a mental construct but possessed what he referred to as duration. He saw the fluid flow of time as composed of myriad temporal particles, which are pieced together by our consciousness. In his book, Being and Time, the phenomenologist and existentialist Martin Heidegger concluded that we do not exist within time, but in a very real way we are time, and the whole concept of time is inseparable from the human experience.

There is a long-standing relationship between science and philosophy, a friendly rivalry. The two disciplines are different, they have different aims, but their subject-matters often overlap. The study of time is one topic where a philosophical perspective is helpful, even to scientists. From Boltzmann to quantum theory, from Einstein to loop quantum gravity, our understanding of time has radically changed. The idea of an alternative universe and the many-worlds interpretation of quantum mechanics adds a whole new dimension to the discussion of the nature of time. In disconnected time streams, in a potentially infinite number of parallel universes, some could be linear and others circular; time could continuously branch and bifurcate, or different time streams could merge and fuse into one; the laws of causality and succession could break down or not apply. The concept of imaginary time is derived from quantum mechanics and was introduced by Stephen Hawking in his book A Brief History of Time as a way of avoiding the idea of a singularity at the beginning of the universe. Hawking proposed that space and imaginary time together are finite, but have no boundary—in a similar way as the two-dimensional surface of a sphere has no boundary.

St. Augustine famously encapsulated the experience of so many of us, when he observed: “What, then, is time? If no one ask of me, I know; if I wish to explain to him who asks, I know not..” Maybe we should just define time, according to the Oxford Dictionary: “the indefinite continued progress of existence and events in the past, present, and future.”