How much did so-called heretics understand the sense of defeat.

There is a great distance between us and medieval heretics: first of all, in terms of time, and then also conceptually and terminologically. It is not easy to ‘bridge the gap’ to those who chose the stake to remain faithful to their own choice (háiresis means to make one’s own choice). Nowadays, we are accustomed to using the term heretic to designate a radical concept, but above all, provocative behavior. In most cases, the stake was not a provocation but an endorsement of evangelical principles. In the Middle Ages, those we now call heretics never defined themselves like that: such an identity was attributed to them later, far from the religious choice of those who wanted to follow Christ and his message of salvation. In the Middle Ages, ‘heresy’ was never an isolated noun: it was always haeretica pravitas, meaning heretical perversity, to indicate depraved behavior.
The first failure of medieval heretics consisted of being known through an identity that was crushed and deformed by the theological-dogmatic mentality of the judges or, better, of the inquisitors of the ‘heretic depraved behavior’ (inquisitores haereticae pravitatis). Failure and defeat were also on another level, which was essential for their historical reconstruction: the survival of documents. The words and actions of the losers have been lost. Concerning the so-called heretics—we now know that they never defined themselves in this way—the sense of the historical aspect of their religious experience can be found in the documentary relics that reached our archives. Their writings, useful to reconstruct a belief, have rarely survived: judges are interested in actions, facts, names, and relationships in order to investigate and repress. One should not think of a possibility of defense, even less of a sort of defense attorney: “No discussion with heretics” wrote Bernard Gui, the best-known medieval inquisitor in a famous manual for inquisitors. In most cases, we have the books of the winners, not those of the losers. And this represents a failure—also a cultural one—because historical reconstruction is based on surviving documents.
How much did so-called heretics understand this sense of defeat? In the twelfth century, there was no particular attention to unorthodox inclinations except through interpretative models inherited from patristic tradition; nevertheless, the terms heresy and heretics (masculine) were used in pontifical documents. The first names to appear are Pietro di Bruis, the monk Enrico, Arnaldo da Brescia: they were all clergymen inspired by the ideals of apostolic life and evangelical poverty who, with a radical approach, sought to live the eleventh-century ecclesiastical Reformation. The women, on the other hand, were not individuals, but parts of a group, a choir from which indistinct voices stood out. Arnaldo da Brescia is the one we have the most information about, also because of his interaction with the protagonists of his time: the philosopher Abelard, the representatives of the municipality in Rome, the pope, and, lastly, the emperor. His patarine reformist action was not welcomed except for short periods, until around Easter 1155, when Frederick I delivered him to Hadrian IV: a stake was lit, and his ashes were scattered to prevent the tomb from becoming a place of the rebirth of a passionate reforming experience transformed by an individual (Arnaldo) into a group (Arnaldists) by amplifying a danger, most likely not a real one.
For women, the structure of the text on which the men of the Church shaped the image of itinerant preachers, for example, Waldensians, is even more evident. The expression “vulnerable women who are burdened with the guilt of sin,” which generically defined women’s experiences, comes from Paul’s second letter to Timothy (2 Tim 3:6). However, above all, it became a disqualifying topos. Obviously, Waldensian women were not as depraved as implied. Still, this expression conditioned a context in which the scriptural silence of women (“Women should remain silent in the churches,” 1 Cor 14:34) became a programmatic silence on real religious experiences that, moreover, mean something else: the “vulnerable women who are burdened with the guilt of sin” was an apocalyptic warning. Women preachers are a religious and cultural product of men. As is well known, medieval testimonies were mostly written and passed on by men. Women had no voice: they were condemned to silence. 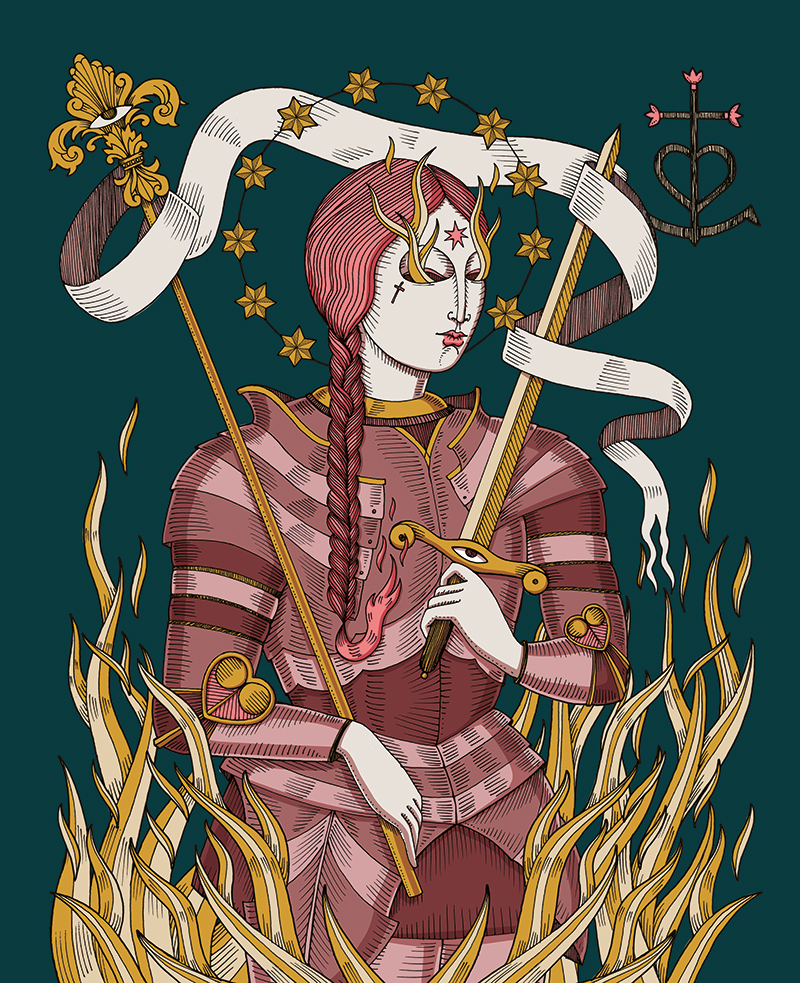 In the thirteenth century, and more precisely in its ‘30s, the inquisition began. Some experiences characterized by awaiting ‘new times’ are clustered between the thirteenth and fourteenth centuries. In 1300, in Milan, there were trials against the devotees of a woman named Guglielma. Her charisma attracted people belonging to different social strata, even Matteo Visconti, the lord of Milan, and his collaborators, or other people of different ages, and, above all, with extensive female participation. A spiritual congregation awaiting the arrival of ‘new times’ and a palingenesis takes on the features of a female church project: with a woman pope, women cardinals, and a female Holy Spirit (i.e., Guglielma). It is not easy to determine whether this bold program was the result of the forcing of the judges. What is certain is the nature of a heterogeneous group whose diversity supports a transversal and profoundly innovative message. The remains of Guglielma, buried at the cemetery of the Cistercian monks of Clairvaux, were burned and many of his devotees were involved in the subsequent political trials that John XXII from Avignon launched against the Visconti. The condemnation was followed by an annulment of the judicial procedures demonstrating a failure, in this case, of pontifical politics.
Quite different is the ‘religious adventure’ of Dolcino da Novara and his apostles or apostles of Christ, as they defined themselves in two letters that the Inquisitor Bernard Gui added to his manual. As an itinerant preacher and prophet of a rebirth achieved employing a new vision of the Church’s history, Dolcino interpreted the expectation of the ‘new times’ as a manifestation of a ‘holy pope’ entrusted with the task of renovating the Church. In this project, the women-preachers played an active role, and among them, Margherita, called ‘la bella’ (‘the beautiful’), stood out, with her aesthetic attributes obscuring other qualities. In 1306 they went up to the mountains, in Valsesia, awaiting the ‘signs’ of the arrival of the ‘new times.’ The prophecies of Dolcino turned out to be wrong: the one who was supposed to be the ‘holy pope,’ Clement V, banned a crusade against them that took place in the spring of 1307. Nevertheless, many men and women never stopped believing in the message of salvation. In June 1307, Dolcino and Margherita were burned at the stake after a trial, the acts of which have been lost, so we have no word of ‘successful’ preacher women and men. For the heterogeneous nature of the aims, an experience that was to be wiped out was divulged through Dante’s megaphone, which, in the Divine Comedy, recalls Dolcino and his armed adventure in the mountains, thus determining the historiographical and folkloric fortune of the most famous Italian heretic.
In June 1310 in Paris, Margaret, called Porète, was burned at the stake together with her book The Mirror of Simple Souls, one of the masterpieces of medieval spiritual literature. During the trial, Margaret observed a rigorous silence and refused to answer the judges’ questions. Her silence was not without consequences: fallen again into heresy, she was doomed to be condemned. Margaret disregarded the authority of the judges and forced them to refer only to her book. We could say that she also becomes the author of her own silence. What was the content of this book? The message is simple: salvation implies abandoning all wills and desires so as to annihilate oneself in order to understand God in a volitional awareness of love. As such, the mediation of the ecclesiastical hierarchies is completed, replaced by direct spiritual communication with the divinity, made accessible to all simple people. Margaret lost her earthly battle, but her book continued to circulate anonymously, in several languages (French, English, Italian, German). A copy was even kept in the papal library to signify that the author was the problem, not the content linked to a spiritual thread in the history of Christianity.
More than a century later, a 19-year-old girl was the protagonist of an exceptional religious and military adventure. As the commander of an army of over 10,000 men and a fighter for the King of France, Jeanne d’Arc, called the Pucelle d’Orléans, was the bearer of a divine message about the King of France to whom she conveyed it. After being captured by the British, a trial took place that led to her being burned at the stake in 1431. Jeanne confronted her judges with a sharp sense of reality, despite her relationship with the supernatural, to which she continually referred. A contradictory female model—a victorious young woman commander, profound spirituality-tangible concreteness—of enormous awareness and charisma was transformed by the judges into arrogance and pride and finally bent to political demands. In 1431, the British considered her an instrument of the devil, used to attack and weaken the royal power that had welcomed, listened to, and supported her. About 20 years later, the annulment processes had to erase any shadow of the alleged evil voice, and the testimonies collected confirmed her sanctity (and therefore the sacredness of the Capetian dynasty). Again, an apparent contradiction in two trials with opposite outcomes. On the one hand they sanctioned the condemnation, on the other hand they collected the testimonies concerning a popular saint who was beatified in 1909, canonized in 1920, and in the end became the patroness of France. Jeanne, first a heretic and then a saint. We could say a saint at the stake. Whose is the failure?