Malabrocca, the champion who finished last

On a quest to earn the award for not winning.

“And what are you doing in here?,” the bewildered farmer asked the cyclist in a yellow-blue jersey, who was crouching in the empty cistern of his cottage. “I’m riding the Giro d’Italia!,” replied the cyclist with a stunning smile, who had parked his racing bike nearby. The farmer stared wide-eyed: “The Giro d’Italia? In my cistern?”
It was the 1949 Giro, and there was a challenging stage in the Dolomites, the Bassano del Grappa-Bolzano, 237 km long, with three mountain passes to climb, the Rolle, the Pordoi and the Gardena. Fausto Coppi was leading the race, running wild. At an average speed of 28.8 km/h, riding for 8 hours, 13 minutes and 35 seconds, he was soon to cross the finish line first, while the runner-up, the pink jersey Adolfo Leoni, was almost 7 minutes behind.
However, the cyclist with the yellow-blue Stucchi jersey hidden inside the cistern wasn’t interested in what was happening to the leading group: he was in a different race, a reverse race. He was riding to finish last. 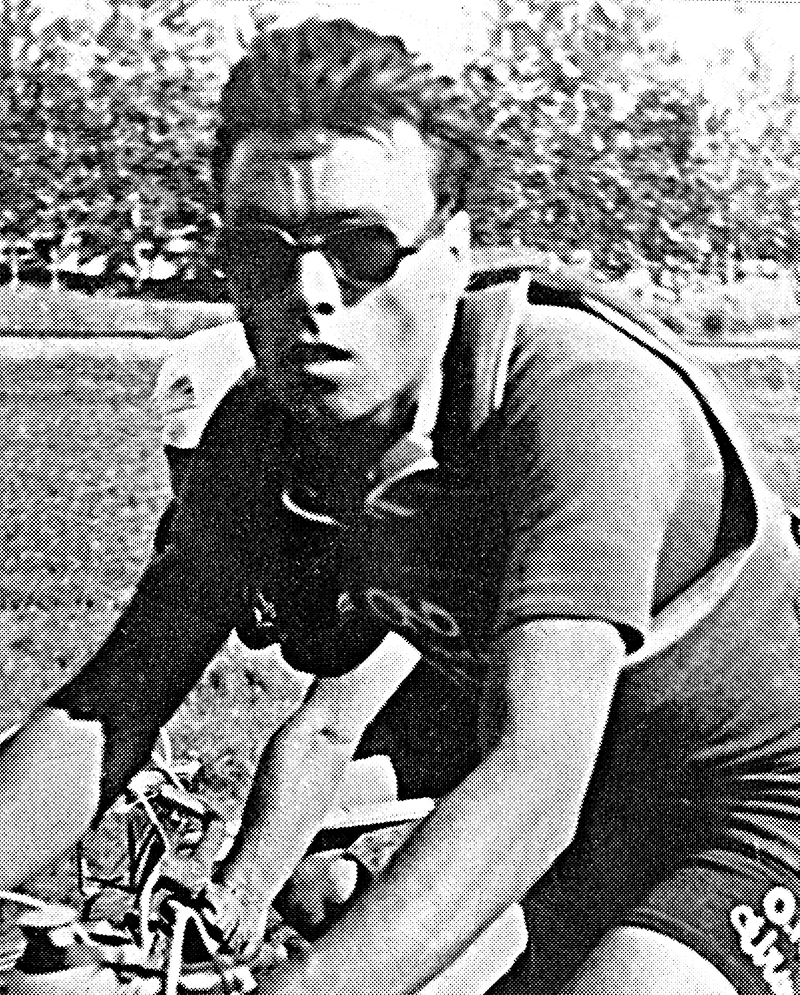 While other competitors in the Giro d’Italia in the mid-1940s rode it to win, Luigi Malabrocca’s main motivation was to liven up the race, for the love of the sport. The art of coming in last was to see who could erase the most time, by hiding in bars, barns, and behind hedges, or even puncturing bicycle tires. The legends of Malabrocca finishing more than 100 km from the winner, but still on time to not be disqualified in Giro d’Italia races, were the subject of a book written by Benito Mazzi, Coppi, Bartali, Carollo and Malabrocca: The adventures of the Black Jersey. During his career Malabrocca rode in three Giro d’Italia races coming in 40th, 50th, and 64th, being awarded the Black Jersey in 1946 and 1947. In his later years, before his death in 2006, he focused on exploring mountains in a different way—through mushroom hunting and fishing. Images courtesy of Serena Malabrocca.

Luigi Malabrocca, called Luisìn, from Tortona, born in 1920, had understood long before that to earn something in that miserable cycling job he had to finish last. Not because he was worse than the others. Indeed, he didn’t have the makings of a champion, unlike his friend Fausto [Coppi], a Tortonese like him, and with whom he had competed in the races among 20-year-olds with high hopes on the roads between Basso Piemonte and Oltrepò Pavese. Because “that dardéla [which in dialect means a lanky, tall guy] goes too fast.” He had understood this since the Varzi circuit in May 1939: Malabrocca finished second, but five minutes behind Coppi, who was born only a year before him but had lots, lots more horsepower. Ten years later, the two friends were together again. Well, together in a certain sense: when Fausto crossed the finish line in Bolzano, Luisin still had 50 kilometres to go and would reach the finish line two hours later. That day was a defeat for Malabrocca. Not so much because he finished last, but because he arrived after the “time limit.”
In stage races, the organizers rule that those who finish too late are not allowed to start the next stage. In the Bolzano-Bassano del Grappa stage, Luigi Malabrocca, a master of racing “against the clock,” miscalculated. He had pushed to the limit. In that 1949 edition, his consolidated superiority in running judiciously slower than the others had found an unexpected and relentless rival. Sante Carollo from Vicenza was taking away from him the symbol of that paradoxical superiority: the Black Jersey.
Let’s take a step back. In 1946 the Giro d’Italia resumed. After five years of suspension due to World War II, it was renamed the “Giro della Rinascita.” Italians were eager to get back to everyday life, and the Pink Race was a popular passion that was too strong to wait any longer. Despite the peninsula’s fragile economic and infrastructure conditions, still battered by war—with bumpy roads, temporary bridges, and makeshift hotels—the organizers, the Gazzetta dello Sport sports daily, put the “great circus” back on its wheels, and decided to give prizes to the first in the ranking, the strongest uphill racer, the winners of the many intermediate goals, but also to those who, in the general ranking, took last place. And while the best was given a Pink Jersey to wear, the last one would be awarded a Black Jersey.
We don’t know if the choice of black was a nod to the two fascist decades, in contrast, and perhaps for mockery. The fact is that, within the group of cyclists participating in the Giro, it identified the one who was the last to close the ranks of the “girini,” the racers of the Giro. Finishing last was not a simple undertaking, because to do so while staying within the crucial “maximum time,” you needed consistency, perseverance and above all wit.
All of which were qualities that Luigi Malabrocca had. In 1946, and then again in 1947, Luisin, also known as “il Cinés” (the Chinese), due to his almond-shaped eyes, dominated the “reverse race.” He was a master at fleeing to the back of the peloton, letting himself be drawn backwards, lingering along the way, perhaps even taking a break at a tavern table, or napping in the shade. But without overdoing it, so as to finish at the back of the pack, but not beyond the time limit set by the regulations.
During the 1946 and 1947 editions, many cyclists had attempted the paradoxical feat of finishing last, but Malabrocca was unbeatable. In 1946 he completed the race 4 hours, 9 minutes and 34 seconds behind the winner, Gino Bartali: converted into “distance” it was as if he were 140 km behind. The penultimate runner-up, Valeriano Zanazzi, “preceded” him by 53 minutes. But as far as prizes are concerned, Malabrocca took home 60,000 lire in prize money: more or less the amount collected by Giulio Bresci, sixth in the general ranking, the equivalent of a worker’s annual salary. Not to mention prizes in kind: flasks of wine, bottles of oil, salami, cheese, and bicycle tires.
The following year Malabrocca encored: his gap from Fausto Coppi, the winner, was 5 hours, 52 minutes and 20 seconds (175 km, more or less), and he kept the penultimate, Riccardo Sarti, at the “appropriate distance” of one hour and 14 minutes. But what matters most is that the Black Jersey had become a celebrity. People would wait for him along the road, without even having to struggle to spot him amid the crowded group of the leaders as they rushed by. Waiting for Malabrocca to go by meant prolonging the spectators’ pleasure of taking part in the itinerant festival of the Giro, enjoying the sight and applauding that icon of the ingenious quest for fortune to which everyone aspired in those still difficult years while hoping for a better future. Hoping that the last can somehow aspire to be the first is a fairy tale that’s good to believe in. 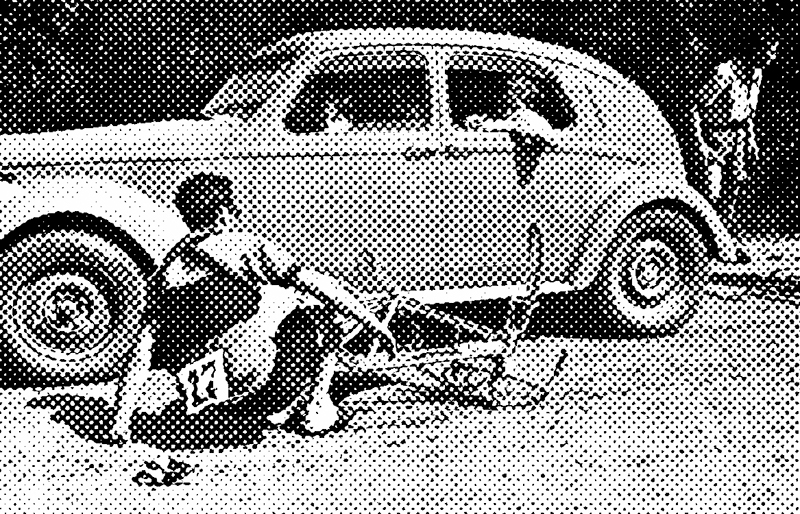 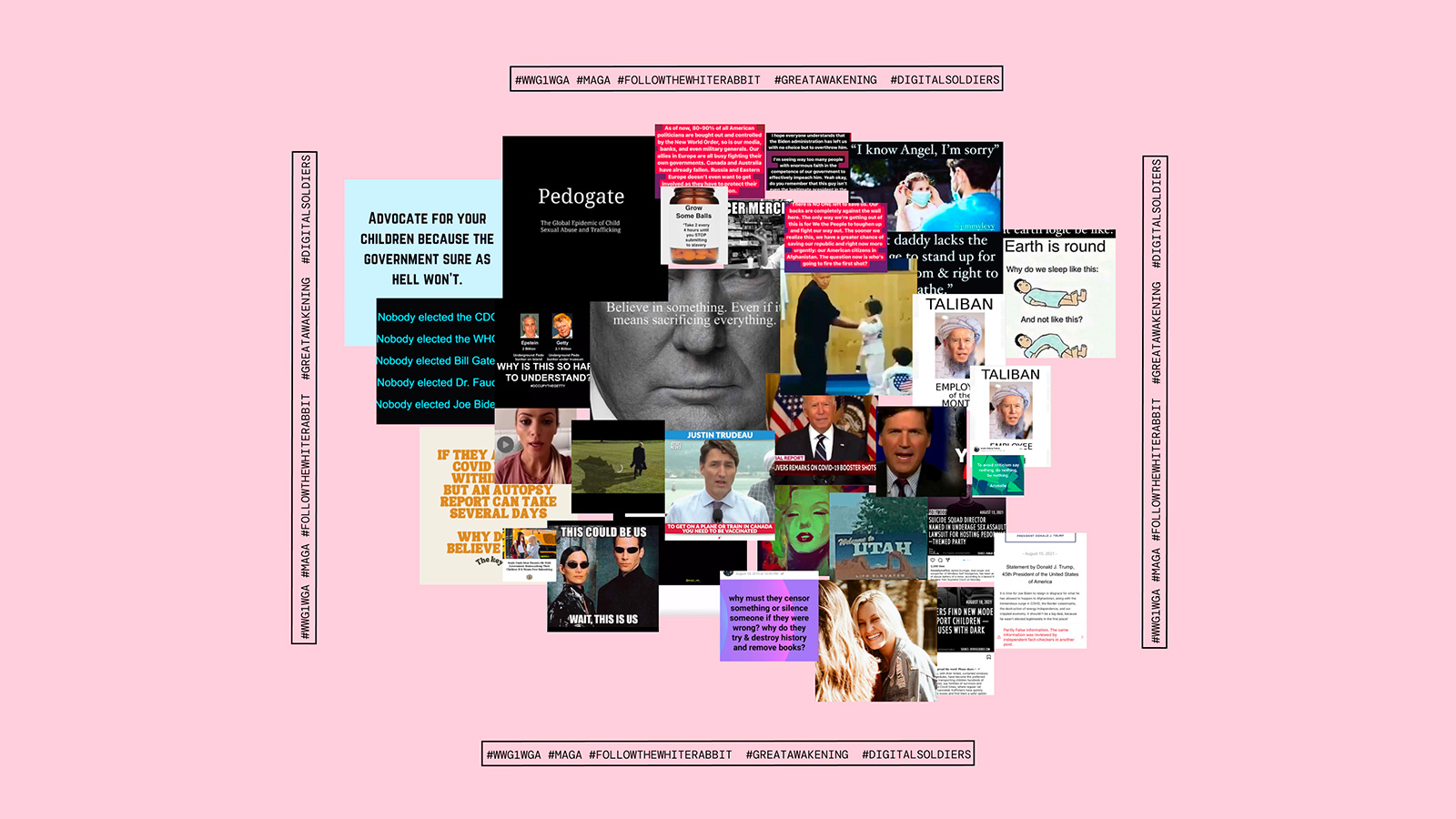 However, back to the Giro of 1949, the one in which Malabrocca was dethroned. At the end of the Bolzano stage, in which he finished beyond the time limit, the jury readmitted him to the race after he appealed. His exclusion would have ruined the expectations for the duel with Sante Carollo, the surprise of that reverse race.
Carollo was last in every sense. He had been enrolled in the race by his team, Wilier Triestina, just hours before the start to replace Fiorenzo Magni, who had won the Giro the year before. Carollo showed up at the starting line wholly unprepared and immediately found himself struggling with breathlessness at the back of the race. They say that in the rush of the enrollment his surname was altered: from Carolo, with the accent on the “a,” he turned into Carollo. At the start, it seems that the bricklayer lent to the two-wheeled sport without much motivation, was humiliated by not even being able to trail the wheels of the last contenders. That reverse leadership wounded his pride as a humble cyclist. When, however, he began to understand what Malabrocca had long since understood, namely that finishing last was quite rewarding in terms of money and popularity, he attacked the challenge head-on. And, at the end of a long struggle full of hesitations, beating around the bush, and hiding, he prevailed: Malabrocca’s last attempt to hide under a bridge in the 14th stage, the Montecatini-Genova, was useless. Due to a mistake made by the timekeepers—or perhaps an act of revenge on their part, having been forced to wait hours and hours for the arrival of the Black Jersey in previous years—Malabrocca was timed together with all the other laggards. In the following stages, Carollo shadowed his rival and retained a huge “advantage” until the end: 2 hours and 10 minutes. The two mirrored, at the opposite end, the challenge that divided the country between Coppi’s fans and Bartali’s supporters. But the fans who supported the last to finish eventually vanished: in 1951 the upside-down ranking was abolished, and its distinctive symbol went with it.
Malabrocca had already shown how his last finish was the result of careful calculation, and not of inevitable destiny: he had won the Paris-Nantes in 1947, the Agostoni Cup in 1948 and a rather adventurous Tour of Yugoslavia in 1949. Later on, he achieved the gratification of becoming the Italian cyclo-cross champion twice. Satisfied with his earnings, he retired in 1956. He turned to two other passions: fishing and mushrooms. Together with his wife Ninfa, he opened a trattoria with a fishing reserve in the countryside of Garlasco: Cascina Barbesina, the heart of Lomellina. Malabrocca fished trout, carp and grayling, while Ninfa cooked them for his diners, many of whom came to eat at their restaurant just to meet the Black Jerseyof the Giro.
With other savings, the couple bought a house in the mountains, in Val Vigezzo, where Malabrocca became an expert mushroom hunter. His last few years were not easy, for various medical conditions—his heart first, then a tracheotomy—but in Val Vigezzo he met Benito Mazzi, a cycling storyteller and an excellent novelist. It was he who wrote a cheerful biography, Coppi, Bartali, Carollo e Malabrocca. Le avventure della maglia nera. The legend of “Mala.”
Malabrocca survived his Ninfa for a few years, and then passed away in 2006. A few months later, a fire destroyed his buen retiro at Cascina Barbesina, and his racing relics went up in smoke. But not his figure as a Beautiful Loser, and upside-down champion.