It’s the end of the world 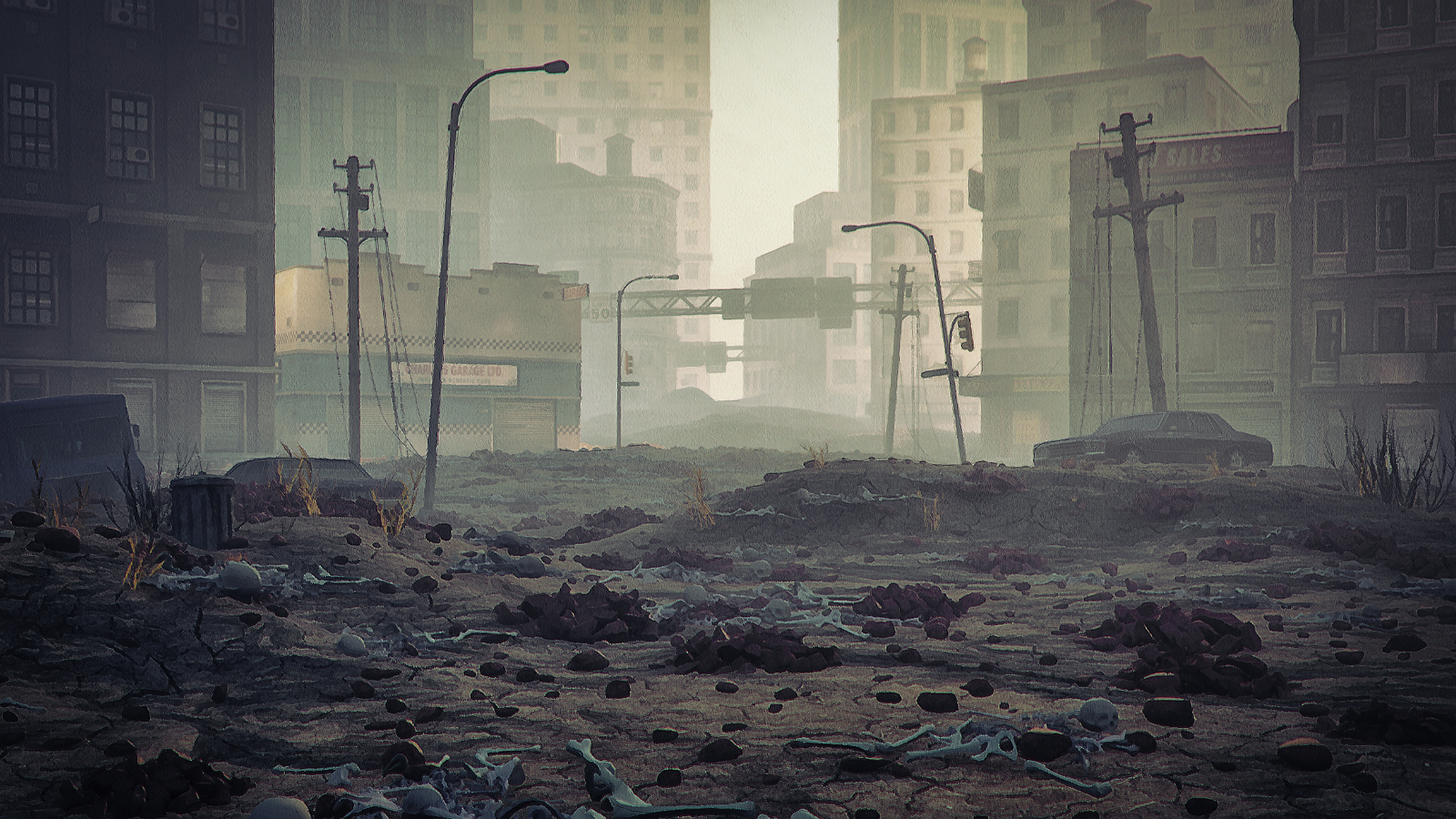 “Post-Anthropocene is repeatedly claimed by scientists to be approaching within the next few decades, as overconsumption keeps destroying our planet’s vital resources. As such, the imminent mass extinction of all living beings of the Earth is a possibility. In this frame, video games have been responding to the arrival of the Post-Anthropocene: in recent years, an increasing number of gamers is both fascinated and creeped out by a world without humans, forcing us to reconsider the central position of humans in video games. To tell the truth, videogames have always been a ‘post-human’ medium; when gamers play, there is more than a mere exchange of inputs and outputs, they have to recalibrate the borders of their proprioception. VR games are a striking example of this, but, as a matter of fact, any gaming experience makes our body boundaries blur. In the book A Play of Bodies, Brendan Keogh reflects on how players can feel ‘present’ in a virtual world without forgetting that they are actually touching a screen, and calls this mechanism an ‘embodied act.’”

Those are the words of Paolo Ruffino, professor of Media Studies at Lincoln University and President of Digra Italia (Digital Games Research Association): according to Ruffino, video games, as a constantly-evolving medium, are able to respond rapidly to the changes humankind is making to the planet, acting, “as Marshall McLuhan said, as extensions of our sensory apparatus.” Videogames have become a fully-fledged medium that merges the main features of all means of communication. Therefore, Ruffino states, “it becomes natural that they contribute to our social, economic and psychic changes, addressing them in a flexible, plastic fashion, just like David Cronenberg’s eXistenZ controller.” At the foundations of gaming lies user interaction, which is not only a matter of action-reaction but also a creative space where we can enjoy an almost fully-immersive experience.

In the last decade, the games with dystopian, post-apocalyptic settings and plot had the most success, but Ruffino reminds us that “the dystopian genre is a constant in pop culture and it’s nothing new, there are variations that make contemporary dystopias different from those of the past. Mark Fisher noted how, after decades of neoliberalism, our imagination reached a stalemate that made us unable even to envisage alternatives, however utopian they can be. ‘It is easier to imagine an end to the world than an end to capitalism’: such concept – made famous by Fisher, but formulated by Žižek and rephrased by many – is more relevant than ever. The representation and exploration of potential future developments of our society, with humankind never managing to prevent its destruction or self-destruction, and having to survive in chaos, puts users in the condition of mitigating their own fears and worries about the future. Essentially, it helps them explore potential different, unknown futures and deal with ancestral fears of one’s own extinction.

“The ecological anxieties of the era we live in are reflected in the narrative, but it’s not just that. The videogames that explicitly leverage such fears in their plot (such as Horizon Zero Dawn) are probably the most trivial cases. Anxiety is exorcised”, Ruffino adds, “less explicitly and perversely, therefore a more original way, in games where humans become marginal in the very act of playing. Think of No Man’s Sky, a game designed to be completed over 585 billion years, much more than the duration of our universe. No Man’s Sky is a videogame meant to be played by other forms of life and in other geological eras.”

Post-apocalyptic video games use four main fictional timeframes to lead players toward the end of civilization: during the apocalypse, a few years following the catastrophe, centuries after the event (the most popular one) or a very remote moment in time where our civilization has been completely forgotten. The reasons leading to the destruction of humanity include nuclear disasters, pandemics, robots and AI, asteroids, alien invasions, and any sort of natural catastrophe. Thanks to their success, most of these videogames are now part of mainstream culture.

Wasteland (Interplay, 1988) is on the top of the list in the genre: developed in the heat of the cold war, the game features a society that collapsed because of a nuclear war between the US and the USSR, exorcising the fears of a generation. Ten years later, the same developers released the first chapter of the hugely successful saga Fallout (Interplay, 1997-1998 and Bethesda, 2008-2018): the game features a planet that’s been first ravaged by a worldwide conflict brought on by a global oil shortage, and then completely destroyed by a nuclear war. One hundred years after, the consequences are still more than visible: the protagonist was born in a new society that rose from the ashes of the old one. He’s aware of the causes that almost led to human extinction and tries to survive the new dystopian social dynamics.

Another masterpiece of the category, this time set in the outbreak of the catastrophe, is The Last of Us (Naughty Dog, 2013). In the game, we’re shown a society working to face a global epidemic, but its relevance, beyond the unquestionable quality of its graphics, lies in how it exposes the fragility of our technology-dependent society and shows how in a very short timeframe our civilization might collapse, giving life to human race’s most feral instincts.

Another very successful video game saga is Metro (4A Games, 2010-2019). Based on the namesake sci-fi novel by Dmitry Glukhovsky, it’s set in the ruins of Moscow following a nuclear war. The survivors found shelter in the subway tunnels and recreated a society, leaving the surface in the hands of their mutant enemies. The plot of the video game reminds us how human beings easily forget history and the mistakes they made in the past, reiterating conflicts that led to the surface destruction and proving their inability to find new ways to build a society.

An original video game, set in a very distant future where there is almost no trace of human civilization – as is the memory of its destruction – is Horizon Zero Dawn (Guerrilla Games, 2017). Here, machines have taken control of the planet, relegating humans to live in small tribal communities with no access to technology. The player is encouraged to investigate the reasons that lead to such a situation, where humans are surrounded by a flourishing and wild nature, populated by mechanical creatures with the features of predators.

Each of these masterpieces featured nature and the impact the different kinds of catastrophes have caused to planet Earth. As Ruffino states, they feature “an ecological scenario where, although limited, resources are abundant and nature flourishes. This imagery is often paired with the return of a mythical antiquity or a post-apocalyptic future that leaves room for a renewed nature. I’m thinking of Red Dead Redemption 2, set in the United States in 1899, or Zelda Breath of the Wild and Horizon Zero Dawn, set in a post-apocalyptic scenario. In all these games, nature is dangerous but prosperous, and the player can make use of it as an almost infinite resource.”

The storytelling common to all these video games challenges the very meaning of human existence on Earth, giving life to a new category that Ruffino defines as “Post-Anthropocene video games: video games that challenge the centrality of mankind, making it increasingly less essential, forcing players to think of their own responsibility and impact on the environment.” The last Civilization VI (Firaxis Games, 2019) edition gives players the chance to develop their own civilization from scratch and guide it through the millennia, from first settlements onwards, managing the resources themselves. With climate change becoming an agent and kicking in during the late stage of civilization, it’s a great example of the role played by nature in video games. If, at first, nature fights back randomly, with no specific reason, the more the civilization moves forward, the more the pollution, temperature, and sea level parameters must be taken into consideration. The gaming experience becomes a learning opportunity. Despite the fact that the video games industry strongly contributes to global warming, with online game servers producing an amount of CO2 that is “comparable to that of cars and industries” and with the energy consumed by consoles and computers worldwide, “as for any other form of art,” argues Ruffino, “video games can challenge our imagination, force us to face unsolved issues and raise original questions, demanding a new ecological utopia.”