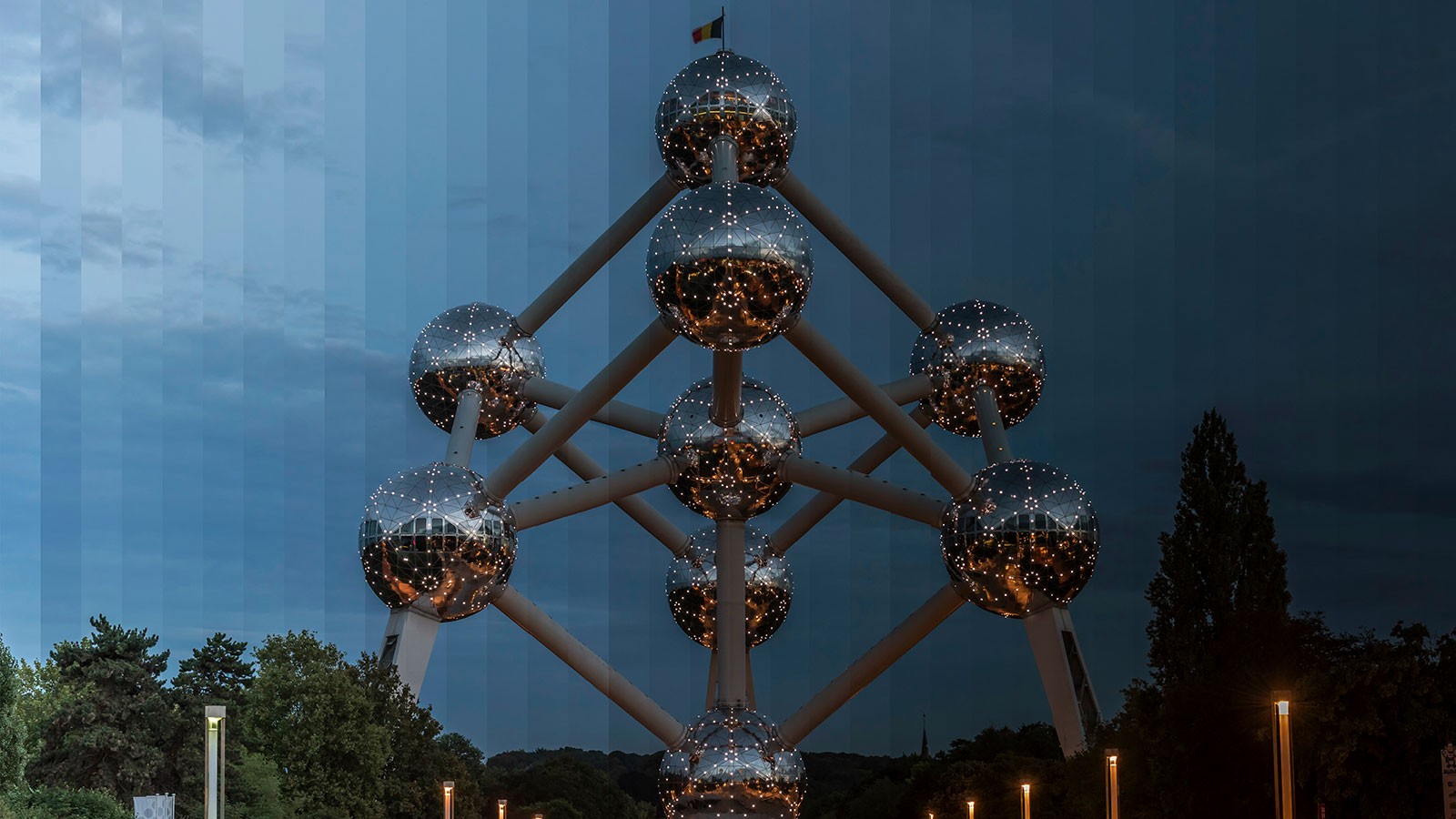 — Photographers Roberta Valtorta and Leonardo Brogioni, explore the relationship between photography and time. They translate it into a sequence of frozen moments and changing images from prolonged or multiple exposures.

"The instant of a photograph is eminently paradoxical. When we snap a photograph, like when we cut, our camera captures a tiny portion of time, placing it in a different dimension from that where human life leaves its record, in an infinite and frozen timeframe.”

Photography historian critic Roberta Valtorta portrays a fascinating phenomenon in her essay The Technological Time of Photography. On the one hand, photography is made of choices concerning time (for example, the shutter speed or the time to shoot), while on the other hand, the image obtained hardly seems to represent time, but only suggest it. We perceive it, as Giovanni Ziliani wrote, ”by observing the changing exterior, the relationship between representations, and the succession of earlier and later."

Over the years, Roberta Valtorta has developed a critical reflection on the relationship between time and photography, together with Leonardo Brogioni, a photographer, journalist, and professor of photography. For both, the relationship translates into a sequence of frozen moments, a series of changing images due to prolonged or multiple exposures. Photography, using time, obtains pictures in which time itself struggles to stand out.

LB - Quoting Ziliani again: "Photography is made in the presence of light, and this is the present. The figures of the present do not stand still; they have a restless substance, are characterized by changeability, and are constantly changing. They do have a substance, but at the same time they also have the weak characteristic of transformation; the present is imbued with past and future.” Photographer Daniel Blaufuks goes so far as to say that there is nothing but the past and the future: it is the present, in fact, that does not exist.

However, according to our conventional understanding, photography is a means capable of freezing an instant in the flow of time, stopping the present forever. This is what Henri Cartier-Bresson conceptualized in his book, The decisive moment: “To take photographs means to recognize—simultaneously and within a fraction of a second—both the fact itself and the rigorous organization of the visually perceived forms that give it meaning.” According to Roland Barthes' more extreme reasoning, the immobilization of time manifests itself in photography in an excessive, monstrous way, in such a way as to make time "obstructed." In this sense, the history of photography appears to be a struggle against time.

RV - The history of photography is part of humankind’s cultural history. All our culture, all we have invented and even thought of is a fight against time, or more precisely against death. Just as are music, literature, art, and science. Thanks to its presumed "exactness," to its ability to relate instantly and directly with reality as it is in motion and continually changing, photography seemed to be a particularly suitable tool to measure time, stop it, and hand down moments of life and history.

So what about motion pictures? Cinema can recount time, and how events develop, while photography can at most capture change in a single fixed, blocked, and rigid image. And yet, this absurd stasis is its strength, because a shot confronts us with a tiny fragment of time frozen and stopped forever as if it had been killed. 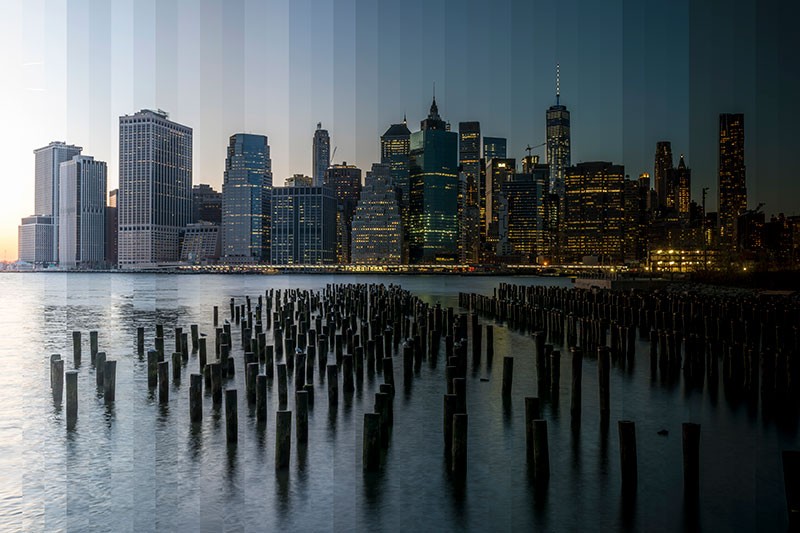 LB - In Italian, the words "istantanea" or "scatto" are used as synonyms of the word photograph, to emphasize its speed of execution, and immediateness. And so we are always examining its temporal element, which has often led to photography being considered a lesser art, inferior to other forms of expression. According to John Berger a British art critic, novelist, and painter, “A drawing contains the time of its own making, and this means that it possesses its own time, independent of the living time of what it portrays. The photograph, by contrast, receives almost instantaneously–usually at a speed that cannot be perceived by the human eye. The only time contained in a photograph is the isolated instant of what it shows.

Moreover, the time that exists within a drawing is not uniform. The artist gives more time to what she or he considers important. A face is likely to contain more time than the sky above it. The time in a drawing accrues according to human value. In a photograph, time is uniform: every part of the image has been subjected to a chemical process of uniform duration. Every drawing, in order to recreate appearances, has recourse to a language, while photography does not possess a language. Photographs do not translate from the appearance of reality: they quote from it. It is because photography has no language of its own, because it quotes rather than translates, that it is said that the camera cannot lie. It cannot lie because it prints directly.”

So is this a defeat of photography in the fight against time?

RV - Actually, photography is just a different and particular way of relating to time. And it depends on what kind of photography we're talking about. If we are talking about a so-called "shot," typical of speedy reporting, we are dealing with a limited amount of time, a point in time, the duration of a so-called "instant." If instead we are talking about posing photography, we have a different situation: it is a more stratified, denser time, and the image becomes pensive, substantial. If we consider images that are set up, designed, and slowly detailed, they contain a long time, which gives them body and makes them seem weightier and denser. Not to mention the use of blurring, which makes layers of time visible and even lets us analyze them. Photography’s battle against time is complex.

LB - A photograph can be raw material (such as news or editorial images, which are essential for an information newspaper) or a finished work (as a work of photographic research, to be hung on the wall of an art collector's house). Sometimes the same photograph plays both roles. What collector would not want to own a picture taken by Robert Capa during the Spanish war and published in Life magazine? In this case, a journalistic image, created and used to inform, has become a work of art, without any further intervention, but only thanks to the passing of time. Capa intended to document the event without any artistic intent, but that happened despite his intention, and his photograph became capable of shifting the past into the future.

RV - It's time that decides, it's history. For some decades now, we have witnessed continuous instances of "artification" of reality: many human expressions, the most varied, not considered art, become so. Photography is one of them; it also occurs with design, fashion, and journalistic writing. And so it can occur that documentaries or industrial photos are considered art while previously they were seen as professional means. This process is spurred by the market, which is omnivorous and needs many products, but in the past, it has happened to some great photographers like Atget or Weegee. 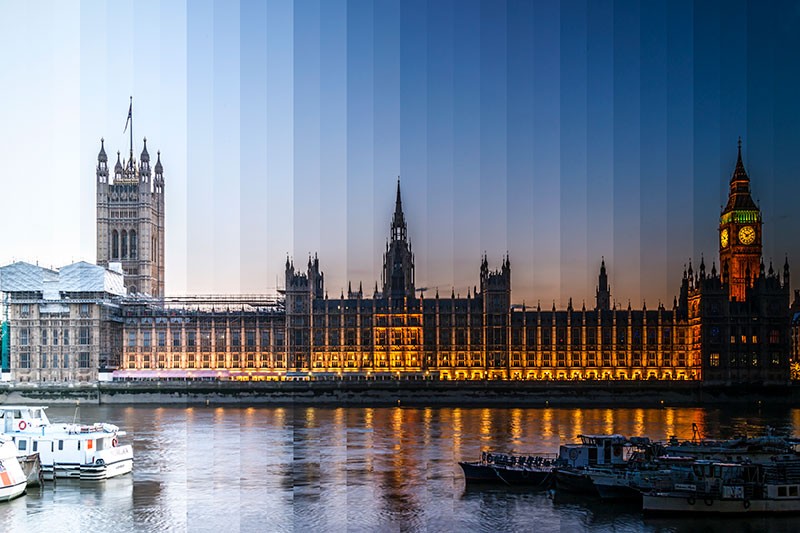 LB - Some authors have attempted to measure time with an almost scientific approach, others with a metalinguistic perspective, going beyond the subject they have photographed to reflect on the photographic medium itself and its ability to analyze time. This is the case of Ugo Mulas and his Verification 3.

Some have recovered moments from the past, giving them a new meaning, to visually support recollection and memory. By combining photos taken at different times, overlapping or intersecting fragments of pictures from different eras, using technical devices that create a filter between camera and subject and recall the flash-back. While others have worked on the flow of time experienced to express feelings, emotions, changes, moods, intimacy–a fluid time, in motion, made of double exposures, blurred, out of focus, and multiple exposures that make different moments coexist in the same frame.

RV - And we must add photomontage, which brings together pieces of images that belong to different times, and staged photography, which contains a very long time made using digital processes in which time multiplies and can no longer be defined. Lastly, I would like to mention the recovery of existing images, which already contain their own original time, but when they are reused, are revitalized, transformed into other images, so as to contain another time that is even more distinct and even more complex.

LB - Photography has always been proof of the occurrence of an event, the truthfulness and credibility of an event. The existence of a photograph meant that the event really existed. Until nowadays, however. In fact, several technological innovations are undermining this certainty: post-production software like Photoshop, and algorithmic programs able to create credible photographs of faces that do not really exist. The website thispersondoesntexist.com shows a photographic portrait of a different person at each page refresh. The website’s artificial intelligence draws information from various databases of real photographic portraits to fabricate new ones. The pictures are then compared with similar images to verify their closeness to reality and therefore their credibility. This process will also lead to increasingly sophisticated levels of the details in the photographs created by artificial intelligence (backgrounds, settings, expressions, combinations). And soon we'll have fake images that are hard to distinguish from real ones. After all, in your essay, you wrote: "The time of photography is the time of technology, and this the only way the photographer is measured, whatever his intent." What’s next?

RV The time of photography and of all contemporary images is absolutely technological. Walter Benjamin spoke of the "optical unconscious,” Franco Vaccari of the "technological unconscious": it means a time completely determined by devices and programs that in an increasingly refined way structure our perception, our experience, our memory, or what remains of it. Humankind is also transformed, not just the techniques and technologies that have accompanied and indeed shaped its history. I believe that the coexistence, or rather the interweaving between human life and technology will become stronger and stronger. Technology will become a part of us, of our own bodies. It will be a different and brand new dimension, which I do not yet know how to gauge.