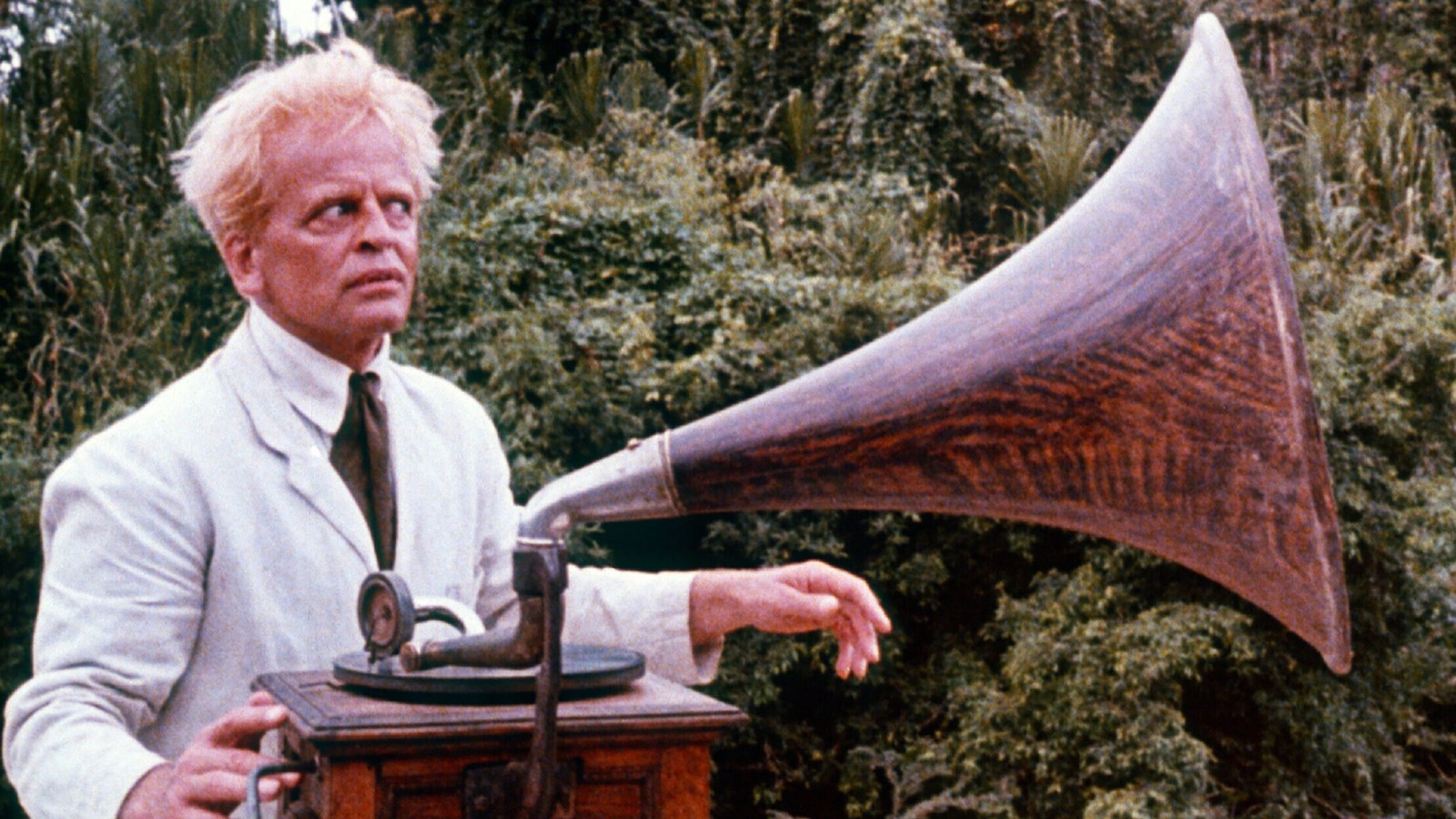 Screenshot from the film Fitzcarraldo by Werner Herzog, with actor Klaus Kinski

— From an avant-garde noise album to a non-school, eight ideas to think beyond the limits of our realities.

Conquest of the Useless. Reflections from the Making of Fitzcarraldo

In the summer of 1979, German director Werner Herzog was busy making his craziest and most ambitious film, Fitzcarraldo, the story of an undertaker-adventurer (Klaus Kinski) who at the turn of the nineteenth and twentieth centuries dreams of building a great opera house in the Amazon. Having bought the land, the man has to haul the building materials through the jungle, going up the Amazon River at any cost, under the intrigued and frightened eyes of the Indians of the forest. Life and cinema have always overlapped for Herzog, who in this film, forces actors and film crews to face harsh conditions for months. The scene in which Firzcarraldo's gigantic steamboat is (really) hoisted up the slope of a hill by human power and then put back into the water on the other side of the hill is legendary. Conquest of the Useless is the working diary of an epic film, but also an inner journey born out of the delirium of the jungle and above all, a book about the power of dreams.

Is it possible to have a multidisciplinary school without students or teachers? On January 12, 1973, in Florence, Italy, the utopian enthusiasm of a group of artists and designers from the Italian radical Arte Povera and Conceptual art scenes developed one of the most inspiring and fascinating cultural experiences of the second half of the twentieth century in Europe — a set of workshops for "the propagation of the use of natural materials and techniques and related behaviors." They included Archizoom, Remo Buti, Andrea Branzi, Ugo La Pietra, Casabella, Riccardo Dalisi, 9999, Gaetano Pesce, Gianni Pettena, Rassegna, Ettore Sottsass, Superstudio, Ufo, and Zziggurat. Global Tools was structured as an avant-garde cooperative, a "counter-school" of architecture and design that aimed to stimulate the free development of individual creativity. During a four-day seminar in Sambuca Val di Pesa, the members of the group met to discuss how to create the Global Tools system focused on four areas: construction, body, communication, theory, and survival. Everything was aimed at subverting and eliminating "institutional teaching, which was considered historically incapable of finding new criteria that were valid for the future.” A school about living instead of learning.

Born in Marseille in 1929, Jacques Carelman moved to Paris in 1956, where he began working as a dentist, and set and costume designer for the stage. In 1966, he illustrated Raymond Queneau's Zazie dans le métro. His is a famous poster from May 1968, which depicts a policeman with a nightstick raised and has become an icon of the French student movement. A member of the Collège de Pataphysique, Carelman developed a compulsive passion for collecting unusual objects, which he then brought together in his most famous work, the Catalogue of Unfindable Objects. Conceived as a parody of a late nineteenth-century mail order catalog, the collection presents, with surreal and Dadaist style, objects such as a coffeepot for masochists with the spout turned towards the user's hand, a machine to "put dots on "i"s, a kangaroo rifle, a typewriter with Egyptian hieroglyphics, and a puzzle composed of two pieces.

What would utopia look like on earth if it were a city or a state? Certainly not like Molvania, a "cradle of polka and whooping cough," one of the most neglected tourist destinations in Eastern Europe. Once known only to Soviet military historians and drug smugglers, this small (imaginary) landlocked republic became known to the world in 2004 when its authors — the Australian satirical group Working Dog — recounted its questionable beauty and traditions in a "Lonely Planet-like" guide. Molvanian tourism was expanding, even though the hotels were tiny, filthy and dilapidated, the ethnic cuisine disgusting, and the tourist attractions boring and expensive, while the Molvanian people were described as generally rude, dirty, and sometimes slightly psychotic. It was worth a visit.

Life in the Woods

Can mother nature be our ideal world? In 1845, the then 20-year-old American writer Henry David Thoreau, intrigued by the question, built a small hut in a quiet and idyllic location among pine trees on the banks of Walden Pond in Massachusetts. He wanted to see what it would be like to live away from other people, surrounded by nature, without the aid of machines and advances of modern civilization. Thoreau's words expressed the concerns of many of his contemporaries as industrialization and war disrupted the world around them. After living in the woods for two years and two months, Thoreau summarized his experiences in a book, Walden: Life in the Woods (1854), which is still stimulating writing for anyone who wants to imagine a less cumbersome and more natural way of life.

To Reach the Clouds: My High Wire Walk Between the Twin Towers

In August 1974, Philippe Petit performed one of the craziest feats man has ever been capable of: a one-hour walk balanced on a tightrope between the Twin Towers of the World Trade Center, which were then under construction in New York. The walk had been planned over the previous years together with a group of friends, with meticulous preparations worthy of a bank robbery. Petit's accomplices crept into the towers disguised as architects, or delivery men, to carry out what they call the "coup d'état," which consisted of reaching the roof and sneaking a heavy cable between the two buildings. The rest is history: who hasn't seen the photos of Petit's walk? And although the Twin Towers no longer exist, James Marsh's documentary Man on Wire — which won an Oscar in 2008 — reminds us that the world belongs to the crazy and daring.

In 1975, Lou Reed had already lived more lives than a cat: he buried the Velvet Underground and relaunched his solo career, collaborating with Bowie and writing Berlin — a concept album dedicated to two junkies who were in love with the German city. After he locked himself up in a studio for weeks with an arsenal of distortion pedals, amplifiers, filters, tremolo effects, and modulators, he surprisingly released the double album Metal Machine Music — an hour of modulated feedback and guitar effects. It was an electro-noise nightmare that Rolling Stone described as the "tubular groaning of a galactic refrigerator." Reed generated abstract cacophonies that had no logical unfolding. It was the perfect soundtrack for a utopia.

Recorded in December 1964, A Love Supreme is not only considered to be one of the greatest albums of all time, but the extreme attempt to expand music beyond human boundaries, leaving to improvisation and technical virtuosity the possibility to explore inaccessible and unknown territories. A Love Supreme is a suite in four parts. Coltrane plays tenor sax on all parts: Acknowledgement, Resolution, Pursuance, and Psalm. The album has reached cult status and inspired a church in San Francisco, www.coltranechurch.org.