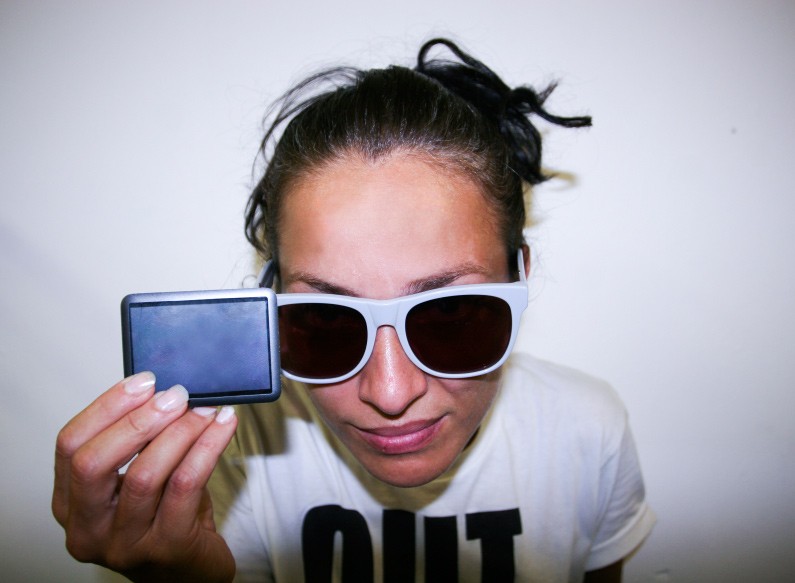 — Simon Beckerman is the founder of Depop, a community mobile marketplace where the world's creatives come to buy, sell and discover the most inspiring and unique things.

How do you innovate? Can you break down the thinking behind the innovation process of your company?

What I do is start off from scratch every time, so I pretend there is no context nor tech solutions available on the market — a technique Steve Jobs used. It’s a very practical approach: designing a product starting from a need that you feel in the air, but which people haven’t expressed yet.

With Depop, I wanted to create a 100% mobile marketplace. It was 2010 and I used to tell myself, forget everything you know, think as if laptops were still to be invented. Back then, the boom of apps had just started — Instagram was launched in October 2010 and Depop in the spring of the following year: there was no set path to follow.

So I came up with the idea of integrating social networks, geolocation and push notifications in a single platform — all features that today are taken for granted. In the beginning, it worked liked eBay: if you wanted to purchase a pair of sneakers, you had to send an email to the seller and wait for someone to read it and reply. My intuition was to introduce a chat paired with a smart notifications system to replace the emails: this approach lowered the waiting time down to zero, bringing ‘instantaneousness’ to the purchasing process. We were the first ones to build such a marketplace with a specific focus on young users, and we were relying on Instagram, which boomed shortly after our launch, as our marketing platform. We tested Depop in Italy first, then we expanded to the UK, and we’re now focusing on the US.

What has changed in the e-commerce scenario since last year? What are the most interesting things you’ve seen happening?

Actually, things have moved on pretty slowly since the smartphone revolution of 2010-2011. The only really relevant innovation - which we are considering to implement - is the consignment services’ evolution: instead of putting an item on sale and waiting to receive an offer, the item is given off consignment to a third party website which takes pictures and guarantees its authenticity. It’s what, for example, Vestiaire Collective and TheRealReal are doing right now — and this sector is expected to grow over the next few years.

The second next big thing is the impact of Machine Learning: we can finally train machines to have taste and recognize what we like or not. But we’re only at the beginning of this revolution. There’s still a lot to work needed in order to create integrated systems with AI and humans working in deep synergy. One of the best examples of this is Apple Music, where a human editorial team preselects songs for users and an AI generates a playlist of songs they might like based on that first curators’ handpick. 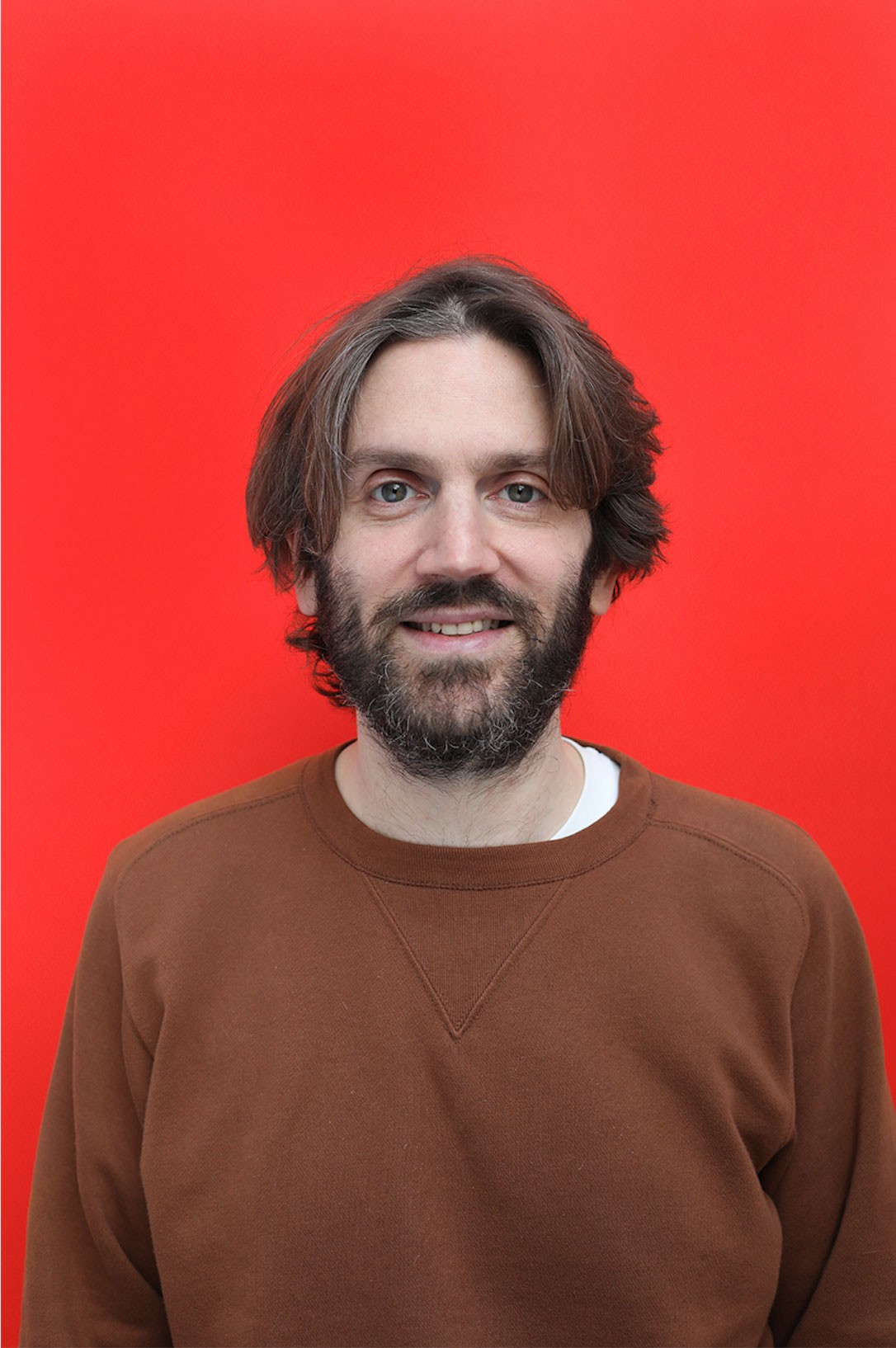 Do you see this as an opportunity for Depop, too?

We’re still a bit behind on this, but we’ve put together a data science team who is creating an infrastructure right now. Our model will be similar to Apple Music’s, because we believe in the effectiveness of the combination of machine learning and human touch. To us, curation is pivotal.

I don’t believe in fully-automated systems. In the last few months, there’s been much ado about a robot that makes pizza: they say its pizza is twice as good and prepared twice as fast than the one baked by the best pizza chef out there. Even though I’m a technology optimist, the very idea of full automation doesn’t turn me on. I’m not saying that it shouldn’t or wouldn’t be a part of the future of work, but there has to be some balance, with 40% human intervention in processes performed for the remaining 60% by machines and AI for example.

But there’s more. The more information available online, the most difficult will be for the user to find what they’re looking for. We want to simplify the discovery process. And we will do this through curation, which we will deliver both in traditional and unexpected ways. This might depend on my age and on the romantic vision I have on this, or maybe it’s society itself that’s taken a step back and is looking for the human touch after the tech frenzy of the last decade.

Yeah, and we’re really into it. IOS has just launched the API library, which lets you create new ways of dialogue with your app through Siri. We’re working on improving the app by leveraging everything Apple has to offer, from post-touch to voice recognition. We’ll implement a voice-powered search feature, too.

Do chatbots intrigue you?

Very much, even though we’re not developing anything specific yet. Let’s just say that if we decided to expand to the Asian market, we’d surely bet on this WeChat, which is the most popular app in that continent and heavily relies on bots.

My interest in chatbots is also linked to a personal event: in 2008, a few months before Apple bought Siri, I swear I imagined something similar. Back at that time, Steve Jobs’ visionary strength was disruptive already, so I started wondering what would technology be like if Apple didn’t exist. According to my need of starting off from scratch each time, I started thinking about how things worked in the 80’s. Back then, the main operating system was DOS: you wrote a command, and DOS would perform it. It was very complex thought, because you had to know to code, learn its own language first. So I figured that maybe we could teach DOS speak our language instead — something like: ‘Hey, DOS, search for the pictures I took last month at the beach’.

In the heat of enthusiasm, I took a picture of an iPod nano, deleted the Click wheel and enlarged the screen with Photoshop. Then, I filled the screen with a chatbot interface similar to the AOL one — which I used to play with a lot back then. I had even named it after my nickname: Zimen. Then, I sent an email to Steve Jobs that read something like that: ‘Dear Steve, to me that’s what the future will look like: there will be chatbots only. IOS will be a chat which we’ll use to be constantly in touch with our friends. Other than them, there will also be a virtual friend, Zimen, which will reply to any of our questions’. I went on: ‘If you like the idea, since I’m one of your most devoted admirers, you can develop it — possibly with me’. He never replied. But what I mean is that, at the end of the day, even if Apple didn’t exist the world we would still have evolved towards voice recognition. 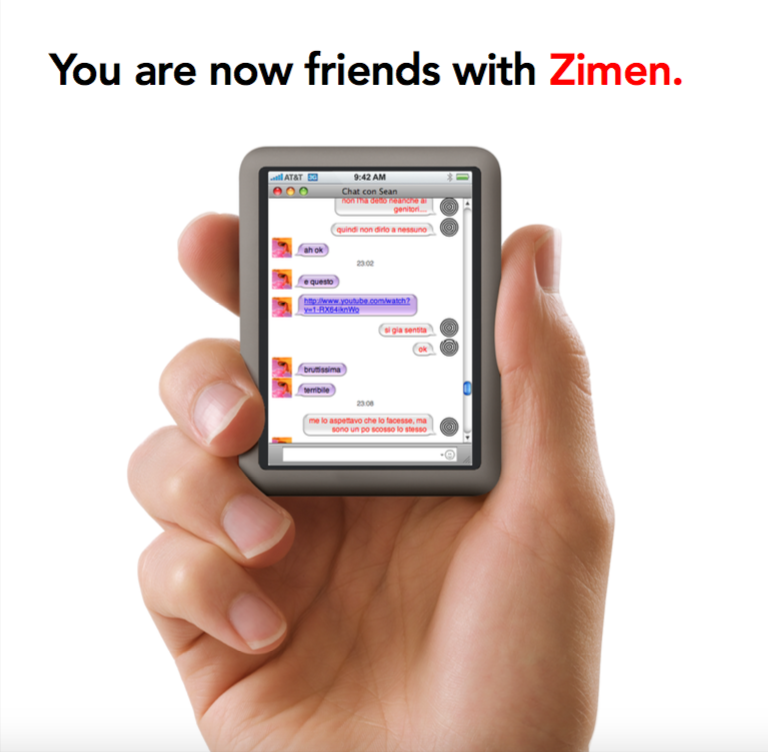 Depop has been conceived as a community for the so-called Gen-Z, a place where youngsters to could feel actively involved and build their own marketplace at the same time. How has your audience evolved since 2011?

The cool thing about Depop is that, thanks to its Instagram-like interface and design, buying and selling is extremely easy. We have a feed where people can post pictures, an “explore” section to find inspiration and private chats: we use these paradigms to attract young customers that up until little ago were not sellers. To us, they’re the entrepreneurs of the future. There are kids who earn hundreds of thousands of pounds per year on Depop: they buy at a good price at flea markets, Supreme stores or on eBay; then, they sell everything back on Depop.

There are the so-called sneakerheads, who buy and sell streetwear and love brands such as Levi’s and Calvin Klein, those who are passionate about vintage and post-vintage clothing; users selling furniture or watches — someone even sold a vintage Fiat 500 once. And then there’s a category no one talks about but which is a big player in Depop: rich and glamorous grannies who sell garments coming from their wardrobe or handmade items. Fashion is our main driver, but in the future we might expand to other categories.

Payment systems are constantly evolving, and making easier payments is what makes a real difference now.

That’s right — and we’re two years behind China on this matter. But Gen-Z uses them all: Venmo, Monzo, Square, Cash, PayPal, and it takes ten seconds to buy a pair of shoes or jeans. Apple is integrating payment within iMessage: we’ll consider the idea of doing the same in case Apple opens the API to developers like us. We’re also thinking of integrating a proprietary payment system in our app to avoid our clients paying the PayPal fees.

Why did you at some point feel the need to open physical stores?

We were looking for real contact with our community: we wanted to meet them, to look each other in the eyes, to know what they think of us. We’ve always organized parties, events, workshops. We like the idea of having shop windows overlooking the sidewalk, a door always open. A place to have meetings in, but also where to sell items selected by us from the Depop marketplace. We already have an “office-store” in Los Angeles and New York, in 2019, we may open one in London and Milan as well.

Which markets are you expanding into?

In 2018 we’ll focus on the US only. In 2019 we’ll think about expanding to other countries, but not in China and Asia: the technical and infrastructural effort is too demanding. If we manage to grow big enough in 2018, we’ll take Japan and Brazil into consideration - which have a strong European taste and a strong inclination towards technology - as well as other European countries. So far, the new signups show that traffic mainly comes from the US and the UK. But the US expansion is taking a lot of time and energy. 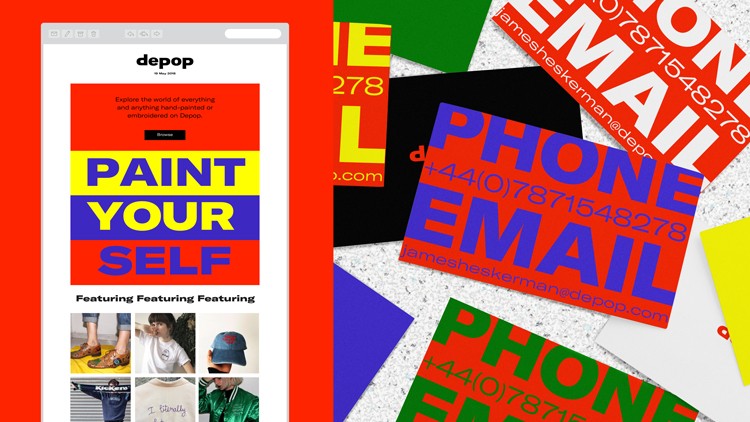 Boasting millions of users, Depop only requires an active phone number to download the app.

What are the possible evolutions of Depop?

I’d love it to become a media company. I imagine a community where you are able to discover what creative people are producing — a Condé Nast of the future with different verticals, where the marketplace is just one of the services on offer. We’re taking into serious consideration launching a radio and perhaps even a kind of in app television network. We want to offer a platform with a very opinionated point of view that is not influenced by advertisers. If we manage to build a media company around Depop, we can create culture, too.

Today, youngsters are hungry for curation and for good quality content, they listen to tons of podcasts. Radios such as Know Wave, NTS and Boiler Room are reaching huge audiences — they’re the 70’s pirate radios of today. All these platforms are becoming new medias. My gauges are Brooklyn, East London, Silver Lake in Los Angeles, certain areas of Berlin: anywhere, for Gen-Z Youtube is the main channel. Online you can find hundreds of Depop Haul and How-to videos.

We’re keeping our eyes open and riding the wave, even though so far we’ve collaborated with creators for marketing campaigns and only produced one original series, ‘Depop Here I Am’, in which we interview our favorite sellers. But things will soon change. We’ve just hired Danielle Greco from VFiles: she’ll be our Head of Content and will manage a team as well as the media company that we will build over the next few years.

Some people are still comparing you to eBay.

That’s okay. eBay might decide to invest in us (laughs). Let’s say we’re the eBay of our generation, we have the right interface and language.

The failure of a system

Who is responsible for the climate crisis?

Death to the Jackals