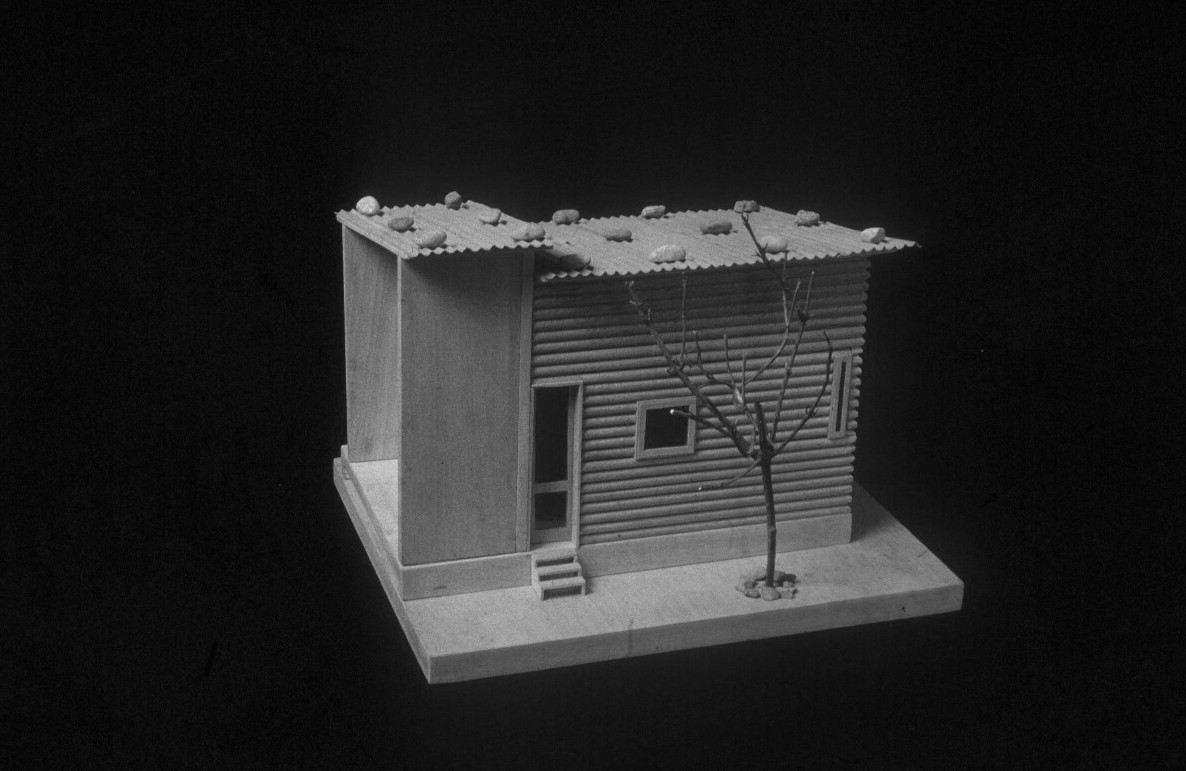 — Since the early days of the industrial age, some have looked through the peephole, seen the beginning of the end, and decided they were better off away from humankind.

The myth of the noble savage seems to have reversed course in the last centuries: noble used to be the man who has been nurtured in nature, away from society. Now, noble is the man who, having foreseen the abyss of modern life approaching, from society deliberately retrieves. Retrieving back to nature is more popular than ever: is the cabin the best place where to have a privileged look at this era from?

Great acceleration, climate change, anthropocentrism, end of the world. What’s your definition of Anthropocene? Does it make sense to talk about it or is it just a philosophical blunder that is taking us on a wrong road?

It’s a complex issue. The posthumanist philosopher Rosi Braidotti argues that we should talk about “anthropomeme” rather than Anthropocene – a neologism which includes a wide range of definitions: Capitalocene, Chthulucene, Anthrobscene, Plasticene. All these descriptors have the absurd claim of superimposing the destiny of the Planet with our own, as if geological epochs and our era coincided. The Anthropocene is, at most, a metaphorical framework to work in, something with no clear geological foundation. What’s widely accepted is the concept of Anthropocene to describe, philosophically, and conceptually, how humans have transformed and accelerated the destiny of this planet and made it happen more quickly than it was supposed to. With the paradox that, if humankind is part of nature and our intrinsic nature is that of consuming resources rather than preserving them, all this was probably somehow part of the natural order of things already. Undoubtedly what the Anthropocene describes is its unexpected impact on anthropocentrism, meaning on our habits and practices. My perspective, however, is different: I find it more interesting to understand the operation of the totally ineffective strategies developed by those radical thinkers who acknowledged the end of humankind’s centrality in the world. For them, the issue can’t be tackled by “staying human,” but rather by thinking out of the traditional forms of associative life. With the idea that today’s minority views are the only solution for the future.

You criticize the idea of nature as being something “other” than society-related. In this perspective, not only nature wouldn’t be natural, but there wouldn’t be a nature’s “point of view” either. Which, by the way, would make any form of ecologism, environmentalism or civil disobedience vain. From this view, comes the idea of wild nature as the place to return to. It’s a paradigm – the only one possible – which you faced through the interpretative model of the cabin.

There’s a vast, underground literature devoted to cabins, made of blogs, Instagram accounts, and specialized publications. “Cabin porn” is an archetype that describes the current tendency to isolate oneself to more closely re-connect with nature. I’m talking about people who have left their cities and social life to retire in the woods or a desert and have built a shelter with their own hands there. What matters to me, is the pivotal importance of some attempts in human history, which radically opposed the traditional line of progress. The first example of this is Henry David Thoreau’s cabin. The year was 1850; the Industrial Revolution was at its early days, the Fordist system had yet to come, electricity was available only in a few houses. The future was not there yet: it was being foreshadowed. Thoreau sensed that the light that had come on was the beginning of the end. He realized that that huge collective effort to make our lives better was doomed to make it worse, and understood that most things his contemporaries were striving for were not actually necessary. So, he left the scene: at the age of 28, he left the city, built himself a cabin in the woods around Boston, and started looking for another model, a more radical one, to carry out his existence. His legacy is Walden, a book-manifesto where he recounted his experience in the woods, seeking for a more intimate relationship with nature, far from a society that did not represent the true values one should follow.

The second cabin is that of Theodore Kaczynski, known as Unabomber. He’s always been characterized as a terrorist, but very little has been said of his philosophical thought.

This is where things get interesting. The whole story took place in the ’60s and ’70s: the digital age was gaining ground the US society, the first computer stores were popping up everywhere and what had been prophesied by Thoreau (technological slavery) was coming true. That was still an early age, and computers were not “personal” yet. Kaczynski found inspiration in Thoreau’s work and realized that the enemy was not only the industrial system but also the distribution system. It is no coincidence that his first attack targeted a computer store a few steps away from his house. Theodore Kaczynski was a remarkable character: at the age of 26 he was an associate professor at Berkeley University, had a very high IQ, and had managed to solve a 200-year old unsolved geometric function theory problem. Two years later, he quit it all and built himself a cabin in Montana. In this case, radical thinking became an opposition to something that was happening within society. Again, the underlying idea was that all you need is within the cabin.

Like Thoreau, Kaczynski also isolated himself from society and wrote a manifesto, Industrial Society and Its Future.

A manifesto which was half published half in the New York Times, half in the Washington Post. The thesis unfolded there is that industrial society may survive or collapse, but it’ll be a catastrophe in both cases. In other words, Kaczynski put us at a crossroad we don’t think of much often: however it goes it’s going to end up in tragedy, because industrial society doesn’t have a real goal, it’s programmed to forge ahead, without aiming a specific direction. Kaczynski stated: if industrial society survives, we will no longer have private spaces, we’ll just work on and on, we’ll be subject to the digitalization of our personal memories, we’ll lose any sort of connection with nature, and we’ll destroy the planet. Then, he strongly criticized liberals, feminists and ecologists, three advanced forms of reformism which in his opinion were doing nothing but sugaring the pill. For Kaczynski humankind can’t “win” rights, but rather owns them by nature. He questioned the fact that mankind, already enslaved by technology, has become unable to do anything: people no longer know how to build a house, grow vegetables, or hunt. It’s a rupturing, powerful and dangerous thought. It’s no coincidence that what Kaczynski wrote in jail was classified until 2100.

The third cabin is that of Le Corbusier.

And that was a crucial moment for our own history, because Le Corbusier built his cabin at the age of 90. We’re talking about a man who had a deep knowledge of life, was an authority of Modernism and one of the founding fathers of modern city planning. He theorized the “house” as a “machine to live in,” and his projects contributed to the creation of an anthropocentric industrial space. But in the last years of his life, he suffered the opposite fascination and retired to a cabin on the French Riviera. Paradoxically, he represents the failure of his own project: as if what really mattered was not integration, but detachment from society. Again, also with Le Corbusier, the space dedicated to radical thought is a sort of cave.

The cave model is an extreme attempt to deal with topics such as Anthropocene, anthropocentrism, transhuman, transhumanism under a different perspective: it’s a quest for a way out.

Interestingly, we resigned to the idea of a forthcoming climate disaster, and are giving up the battle against ourselves. We constantly tell each other we only have 12 years to stop the apocalypse, but at the same time we say it’s impossible. Cabins are a cry for action and force us to reset our ethics system. Kaczynski stated that often throughout his manifesto: are we sure that ethics itself is not a product of industrial society and technology? A cabin is not a shelter for individualists to retire and fight their personal battle, but the place to go back to and live, without questioning the meaning of things, in the certainty that at most you can change your world, but not a complex geopolitical system.