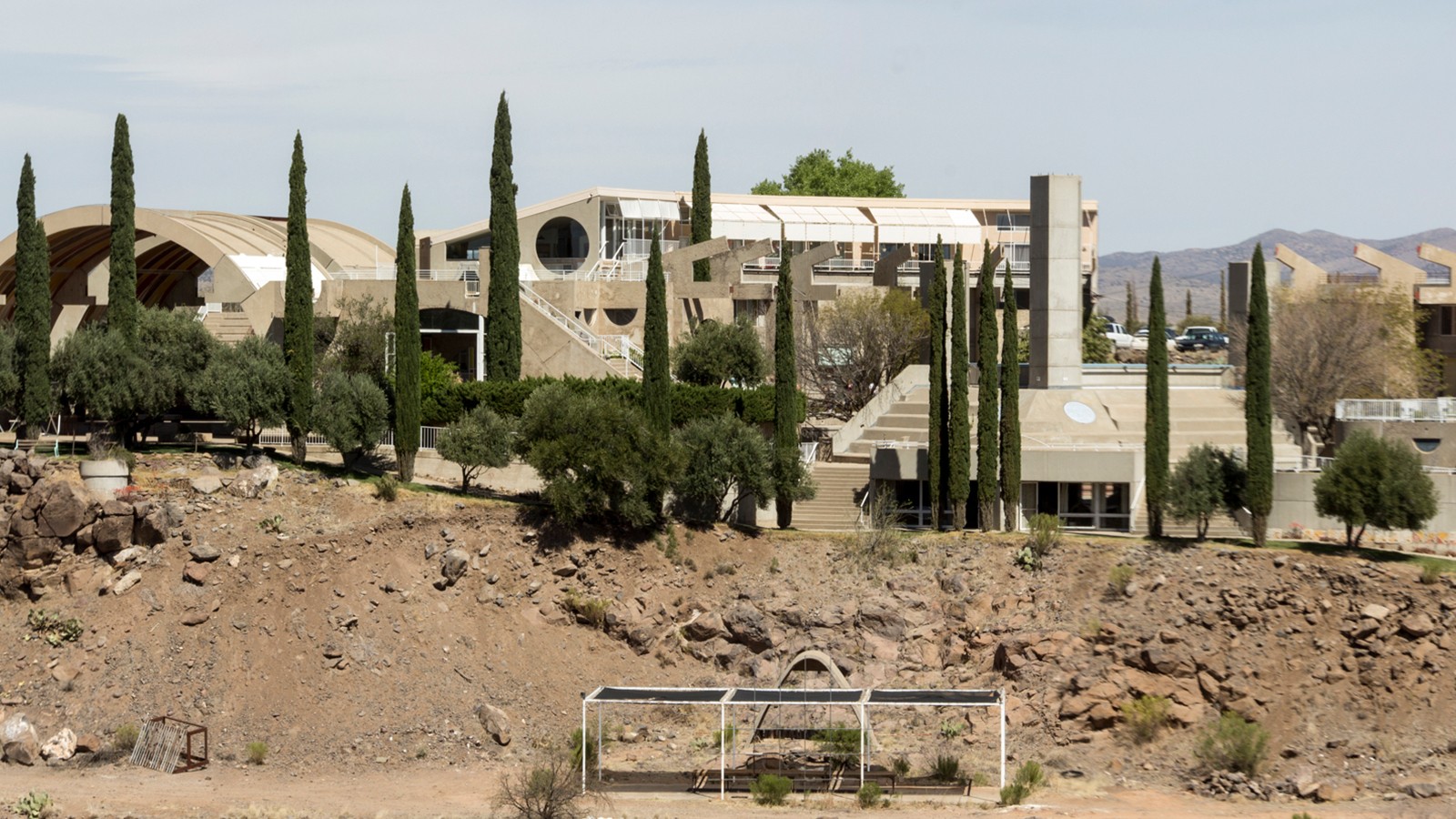 — Arcosanti is a projected experimental town with a molten bronze bell casting business in central Arizona, which was posited by Italian-American architect Paolo Soleri.

Established in 1970 by Italian architect, artist, and philosopher Paolo Soleri, Arcosanti is an urban laboratory constructed in the Arizona high desert to test an alternative human habitat. After 50 years, it still looks like an experiential space to “prototype” an environment like no others.

Soleri, who spent most of his life in the US, thought that ill-conceived urban design was at the heart of most of the challenges faced by contemporary cities. So he spent most of his career to come up with an alternative habitat to that of modern cities: arcologies.

Born from the blend of “architecture” and “ecology,” arcologies were defined by Soleri in his 1969 book titled The City in the Image of Man as “organisms” designed in harmony with nature. Energy use was to be minimized, human interaction maximized, and transportation made super-efficient by design. In many ways, Soleri’s “arcologies” can be considered a precursor of today's smart cities.

But unlike most utopias, that of Soleri was transported from sketchbook to reality. In 1970, Soleri established what was defined by Newsweek magazine as “the greatest urban experiment of his time.” Nestled among the rocky Arizona desert, the 25-acre settlement of Arcosanti was designed to serve a population of 5,000 by maximizing natural resources like sun and wind and offsetting waste through energy-efficient design. Industrial and residential activities were to be hosted in adjacent structures to minimize the need for transportation. Urban greenhouses were to provide most of the food needed by the community.

Arcosanti’s aesthetics matched its pioneering concept. The use of tilt-up concrete panels cast in the ground resulted in buildings that looked like they had been dug out from the earth. Large white domes and Romanesque ribbed vaults standing against the reddish Arizona desert gave it an otherworldly look. George Lucas reportedly visited Arcosanti to come up with stage design for the Mos Eisley spaceport in Star Wars. And the network of staircases, ramps, and bridges symbolized at once complexity and minimalism, two concepts at the heart of the Arcosanti project.

At the time, Wright was working on plans for Broadacre City, a 4 square mile community whereby each resident would build his own low-rise homestead. This, Soleri thought, was going to drive suburban Americans further toward becoming “motorized hermits,” continually driving from one place to the next without meaningful interaction with each other or their surrounding landscape. Instead, the young architect looked to Italian cities with their integration of work and residential life, walking lifestyle and communal space.

In 1950, he returned to Italy and asked Ceramica Artistica Solimene, a ceramics factory, to take him on as an apprentice. A few months into his apprenticeships, the Solimene family asked him to come up with a new design for their factory. For this project, Soleri experimented with some concepts that later became a staple of his work. The different functions of the factory—design, production and sales—were organized to maximize efficiency. Clay would flow through a spiraling staircase from the top floor all the way to the ground floor shop. This way, Soleri sought to counteract the monotony and isolation of industrial production with an open and collaborative space.

In 1956 he returned to Paradise Valley, Arizona, and together with his wife, Conny settled in Cosanti, where he lived until his death in 2003. Cosanti, a play on words from the Italian “cosa” (thing) and “anti’ (against), was the place where Soleri developed his first “Earth House,” a structure made by pouring concrete over earthen forms which were then excavated. Being grounded in earth provided “earth houses” with both a strong foundation and a natural insulation system. It was also a real-life application of Soleri’s philosophy that architecture should merge with its surrounding landscape, feed off it and harness its natural characteristics.

In 1970 Soleri and a group of volunteers laid the first stone of what was to become his most important experiment, Arcosanti. Rather than “just” an urban design project, Soleri thought of it as a full-blown social experiment. A sign at the entrance of the settlement read: “If you are truly concerned about the problems of pollution, waste, energy depletion, land, water, air and biological conservation, poverty, segregation, intolerance, population containment, fear, and disillusionment, join us.” Known for his strong work ethic, he refused for Arcosanti to be labeled as a “Hippy” commune and framed it as a “community of builders,” instead.

Since the project started, more than 7,000 people have taken part in workshops to help build his “desert utopia.” Some were tasked with casting bronze and ceramic wind bells, the sales of which were used to finance the project. Others contributed to the design and construction of towers and outdoor workspaces, all created in order to maximize sun exposure in winter and shade during summer. Each person was allocated a 2.4-meter concrete cubicle to live in — Soleri thought that minimizing private space would harness participation in public life outside one’s room.

As Soleri himself explained, many of his ideas around collective life stemmed from Italian cities where spaces are designed to meet what he considered basic human needs such as socialization and the exchange of ideas. The way he conceived buildings to provide views of the untamed Arizona desert is also reminiscent of the city-landscape integration of Italy. But other parts of his project, such as the development of an “energy apron” to capture greenhouse gases and use them for heating, were radical innovations stemmed from his own imagination. The end result was a conglomerate that looked at once futuristic and the legacy of a long-lost civilization.

Today, the Arcosanti Foundation, which has been managing the project since Soleri’s death in 2013, estimates that around 5% of Soleri’s original plan has been built, including 14 buildings, the wind bell foundry, a performance space, and greenhouses. It is home to around 50 permanent residents and an estimated 50,000 visitors who come to take part in workshops or attend events held in the amphitheater.

Some critics see Arcosanti’s unfinished state as a sign of Soleri’s lack of pragmatism. To others, it proves that Soleri actually used Arcosanti as an open-ended experiment rather than as a development project. Soleri himself used to frame Arcosanti as a tool for urban planning education, seeing value in workshops and planning sessions per se — he reportedly enjoyed sketching his ideas on hundred-feet long paper scrolls as much as seeing those ideas implemented.

What’s sure is that some 50 years after their conception, Soleri’s principles have become a staple of mainstream architecture. Talks of smart cities, sustainable buildings, and green infrastructure are now common across the urban planning community around the world. And while we are yet to see fully functional arcologies, many design studios have plans for arcologies for the near future including Masdar City, a 6 square kilometer space in Abu Dhabi designed by architecture studio Foster + Partners to rely solely on renewable energy sources and the New Orleans Arcology Habitat, a floating development designed to accommodate the changing tides of the Mississippi River, created by Kevin Schopfer. As cities prepare to host 85% of the global population by 2050 and find solutions to climate change, city planners may have no option but to turn Soleri’s utopia into reality to ensure human survival. 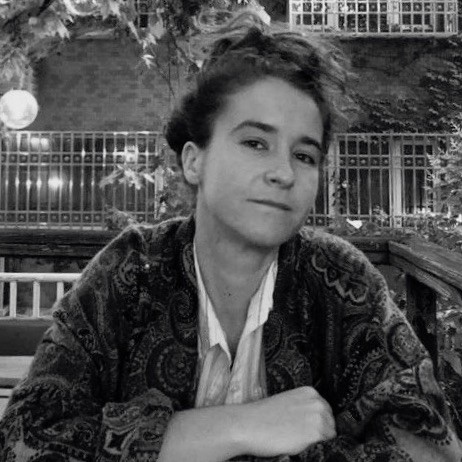 Ideas to expand our realities